And Then There Were Nuns

St. Dominic’s statue is easy to spot in town as he is lad with the star on his forehead for his mother believed his birth and baptism would be blanketed in bright light.  With that start in life Dominic had little choice but to be a priest starting the Dominican order of clergy. 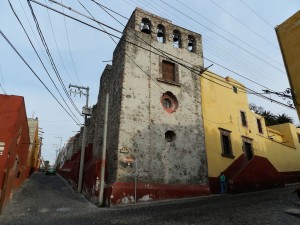 Back in the 1920’s the Mexican government went to war against the Church, who was the country’s largest land owner.  The war was centered here in the state of Guanajuato and it was not a good time to be clergy so the Dominican nuns that taught at the school dispersed.  Well, except the Mother Superior.  Sister María Luisa Hernández disguised herself as a maid and stayed at the former convent cleaning what, during the war years, was a house of prostitution.

The war finally ended and the church lost most of its vast land holdings.  However, Mexican law places great emphasis on the notion that who lives in place is the legal owner.  This was the opportunity Sr. Maria Luisa was waiting for as she was able to come forth and announce she was a Dominican nun and having always lived in the house, it was still a convent.

The building is home to today’s Dominican nuns that teach at St. Dominic’s school.  Present-day ladies of the oldest profession have found new digs on the road to Delores.