If you have read my column before you know I talk about faith and culture in SMA.  This story does too but it takes a bit of a foray in the hinterlands before squarely landing in SMA. 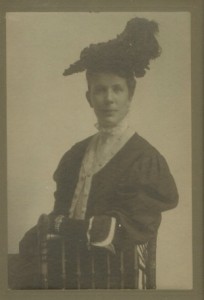 The woman in the photograph is my great-aunt, Mary, in central Pennsylvania at the turn of the last century.  She is 18 and this was her engagement photograph.  Shortly afterwards, her father (my great-grandfather) was seriously wounded by machinery at the saw mill and she made a deal with God.  If her father got well, she would call off the marriage and become a nun.

He got well, she canceled the wedding and became a nun.  Along with her photo I have the cross she wore as a nun.  When opened, it contains relics from various saints (labeled in teeny tiny Latin), including one named Saint Blandina.  Blandina was my aunt’s nun name.

Saint Blandina is the first female saint and patron saint of women.  When tossed to the lions in the Coliseum said felines didn’t eat Blandina, and instead took cat naps.  This image of a woman with sleepy lions is Blandina’s classic representation in art .

Roman soldiers removed the exhausted lions and brought in bulls that didn’t share the lions’ thoughts on Blandina and spiked her about like a volleyball until she died.  Then when the soldiers tossed her body into the Tiber River the Roman goddess of the river flung her corpse back out and her body was labeled incorruptible by the early Catholic Church.  Hence, why I have a relic of her’s. 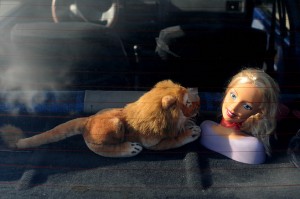 A few years back SMA had one of their first female taxi drivers.  Across the back seat towards the rear window she placed a Barbie and a sleepy Beanie Baby lion.  That would be St. Blandina, patroness of women.

For me, I wanted St. Blandina, well, her relic, on a rosary I was making.  So I went to the Tuesday market with friends and found a cross that had what looked like tweezers attached to it.  It was a perfect spot to place a relic, or smoke a doobie.

Well my pals, Nevin and Yolanda, were aghast I had such a thought, until the vendor agreed that was exactly what the clip was once used for.  This little relic has had quite the adventure!

So every day I wear the rosary and close to my heart is a relic from a first century saint and my Great Aunt Mary/Sister Blandina, or a cross-shaped roach clip always ready to light a joint.  The choice is yours, as a big part of faith is believing what you want to!