When my daughter was in sixth grade she had to do a paper on folk art so I took her to a remote cloister monastery in the backwaters of South Carolina that opens their doors to the public one weekend a year.  Once in, visitors are allowed to view crèches from around the world and we learned the impact of St. Francis on the nativity story. 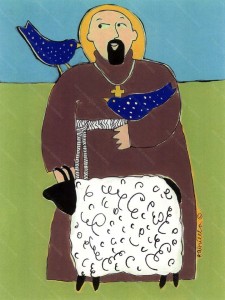 Saint Francis of Assisi was a 1200’s Italian man of many accomplishments in his day several of which impact today’s SMA.  His namesake church just off the jardin hosts weddings and quinceañeras every weekend.  Being the patron of animals his image adorns many local bird feeders.  His followers, the Franciscans, continue to provide aid to SMA residents.

However, St. Francis’ largest impact on SMA’s culture was creating the concept of live nativities.  In the 16th and 17th centuries his followers in the Franciscan order learned the native languages of the Tarasca and Otomi tribes and incorporated live nativities for the nine days leading up to Christmas.  Live nativities had a profound impact on converting the surrounding indigenous communities.

Senor Cura J. Manuel de Villegas wrote at the time how much the Spanish, Americans and indigenous enjoyed portraying the various parts in the story of Jesus’ birth.  With the Wise Men representing the three basic skin tones plus shepherds, there are available parts for everyone regardless of age, gender or race.  Live nativities were held in San Miguel’s campos, haciendas and pueblos where the Franciscans performed missionary work.

In memory of these times, the jardin hosts a partial live nativity each year.  Since 1939 the Almanza family brings the animals into the jardin as part of a family tradition of constructing and repairing spiritual art in local churches.  Their efforts, like those put forth in the posadas and pastorelas, help those in SMA remember the nativity story is not just a story, but a living example reflective of today’s faith and culture.

One year when my children were little they got to portray Mary, a Wise Man and a shepherd in our tiny island’s holiday season’s live nativity.   I was secretly very jealous as all I ever got cast as in second grade was the sturdy mule!  Luckily the nuns at The Holy Name of Jesus school had no idea the concept of a life nativity extended to the livestock like it does here!