Day of the Innocents – Joke’s on You!

This day commemorates the day Herod sent out his troops to slaughter all male children under two years old in hopes of catching and killing the newborn King the Magi told him had been born in Bethlehem. But despite its bloody historical basis, it’s a day of fun and jokes—Jesus did escape, after all. 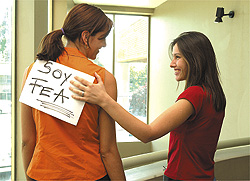 Mexicans play elaborate practical jokes on each other today. If you fall for one, you’ll hear the cry of “Inocente! Inocente!”—roughly equivalent to being called an April Fool in the U.S.

The perennial popular Christmas carol, The Coventry Carol, refers to the Massacre of the Innocents.  Written in the 1500’s the lyrics of this carol represent a mother’s lament for her doomed child and is traditionally sung a cappella.