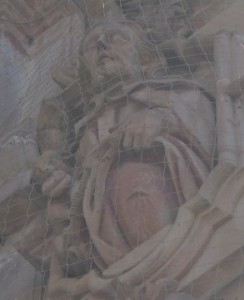 Mid August announces the feast day of a saint with a cloudy past that welcomes everyone into the Parroquia and St. Francis churches.  While in the portal of St. Francis look up the column to your right.  You’ll see a lad lifting his tunic to show his plague scarred leg.  What is the animal you see next to him?

Most see the dog that legendarily brought bread to the lad and licked his wound well.  However, children, and the child-like, see a monkey.  The dog is

much easier to see to your left as you enter the Parroquia and since he’s a Mexican dog here the pooch brings Mexican bolillo bread.

The saint is Roche (Roch, Rock, Roque or if you are pop singer Madonna you name your son for the saint and call him Rocco).  Normally believed to have lived in the 1300’s some scholars place him in the 600’s.  Either way, the story goes he is pushed into woods surrounding Rome for having the plague.  He survives being alone by a dog that daily brings him bread and licks his thigh wound healed.  This makes Saint Roche the patron of dogs, plagues and surgery.  He also is the name and logo for a line of dog shampoo.

Saint Roche was popular in colonial era San Miguel as a proactive psychological defense approach to combat the randomness of plagues.  Rather than a society depressed and resigned to repeated ravages of plagues, St. Roche gave folks positive steps to regain control over their environment.

You’ll see him in Holy Week processions leading Jesus, Mary, St. John and the rest of the gang which is incongruous since no matter when he lived it was well after Jesus’ death.  The honor is awarded St. Roche for legendarily belonging to St. Francis’ Third Order (the first order was priests, second nuns and third wealthy Spanish men who led normal lives but were buried in Franciscan robes in an apparent effort to confuse St. Peter into letting through the pearly gates of heaven).  The Third Order church in SMA is next to the St. Francis church and one of the oldest in town. 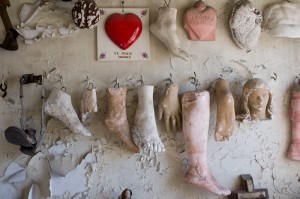 Here in SMA the faithful place small, appreciative metal Milagros (miracles) on saints and virgins who assisted them with their intercession in life’s problems.  In St. Roche’s temple in New Orleans the faithful take the opposite approach.  In regards to his role as patron of surgery residents place a plaster cast of the body part requiring an operation as a request to St. Roche prior to surgery.  These life-sized Milagros of hearts, brains, legs, etc. are off-putting to see scattered about a church and remind me to appreciate our dainty milargros!