The thinking that led to it escapes me, but when I was in Catholic high school the powers that be decided it was a good idea to host a fundraiser where the varsity basketball team played against

the teaching staff, on mules.  I recall these events as being well attended as what adolescent wouldn’t pay to see a mule get the better of Sister Mary of Perpetual Pain, the obviously unstable Fine Arts teacher?

Here in SMA, the mule is firmly established in the culture (though not sports) and faith largely due to the role the domesticated animal had in carrying pregnant Mary to Bethlehem.  To most Northern neighbors the impact of the mule is confined to the Christmas story and corresponding crèches.

Mary’s mule’s appeal started here in Colonial times when the Franciscans introduced the concept of live nativities in and around SMA which was met with widespread appeal.  Not only was the Christmas story now experiential but between the shepherds, wise men and manger animals nearly everyone (indigenous, Spanish, livestock) could play a part!  This tradition continues today with the partial live nativity (starring mules) featured in the jardin each holiday season.

The impact on mules continues year long with Mules’ Day in June.  Dia de las Mulas is associated with pre-Hispanic rituals in which people gave thanks to deities through offerings.

It is also believed that a mule knelt in reverence to God on the day of Corpus Christi (body and blood of Christ featuring local processions and altars) which is celebrated the same day. 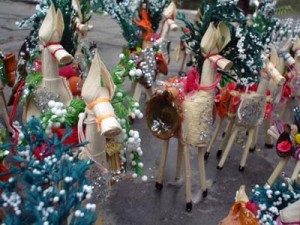 To give or receive a toy mule is considered a friendly joke on Mules’ Day.  With this tradition in mind, stalls line Plaza Civica for Mules’ Day selling hand crafted mules and other toys.  Also mules are often sold by street vendors throughout the year in Centro.

As for nuns playing Mule Basketball, that became a relic strongly associated with the 1980’s much like Rubik’s Cubes and Dynasty, particularly after animal rights activists got involved.  As for Sister Mary of Perpetual Pain (obviously Sr. Peepee, for short), she had a well placed center of gravity and never once toppled off her sturdy mule.  Her habit was knocked askew once proving my older sisters wrong in that nuns did actually have hair.  Coarse and short like a mule’s, but still, it was glimpse of actually hair and well worth the price of admission!