Ecce Homo is the image of Christ presented by Pontius Pilate prior to the crucifixion.  Ecce Homo is Latin for “Behold the man”.   Ecce Homo has allowed Sanmiguelenses to survive drought, frost and other weather disasters that could harm the harvest.

Ecce Homo started in San Miguel in 1712 by the priests at the Temple of St. Felipe Neri (Oratorio) in Plaza Civica.  The main chapel was dedicated to the image of Ecce Homo made from corn stalks.

The indigenous took to the image of Ecce Homo in large part because they could identify with the friars that presented Ecce Homo.  The friars, like the indigenous, lived simple lives, didn’t own shoes, lived in poverty, slept on the floor and ate the same tortillas and chilies as the indigenous.  Ecce Homo also represented the circular nature of life and God that indigenous believed. 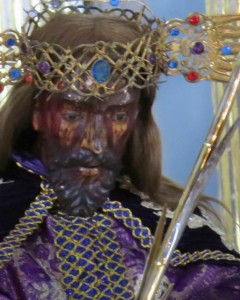 In Colonial times the two weeks of celebrations featured bull fights, cock fights, plays and music.  However, by the end of the 18th century the image of Ecce Homo was placed in a chapel behind the main altar of the Parroquia the indigenous could not access, thus diminishing the importance of the cult of Ecce Homo.

Today for two weeks Ecce Homo sits in the Parroquia’s main altar.  The celebration culminates in a grand parade featuring hours of indigenous dancing in front of the Parroquia in praise of the sun, earth and the cross.  The image of Ecce Homo that provides good weather and harvest attracts pilgrims from the surrounding rural communities, where agriculture remains a way of life.

The much loved and honored  statue of Ecce Homo is the most ancient statue carried in Holy Week processions.