Spirituality in SMA is marked by a strong, feminine temperament.

Prior to the arrival of the Spanish, the Divine was seen as the meeting of the masculine and feminine.   Amongst the indigenous the intersection of the two was represented by a cross.  Early missionaries used the familiar symbol of the cross to place throughout New Spain as an introduction to the new god and saints they brought with them.

The European orientation toward power and control in the Church was too masculine to be accepted in San Miguel, and Mexico as a whole.  The nurturing and consoling nature of faith from the Virgin of Guadalupe stressed a less critical and more maternal emphasis on the healing power of love.  Guadalupe’s appearance began the first widespread acceptance of a new faith and the formation of a uniquely Mexican, and more feminine, Catholicism.

In most Protestant faiths Mary is seen as an historical figure that makes her yearly cameo appearance in nativity sets place under the Christmas tree.  For American and Canadian Catholics, she is a deity onto herself, above the Saints and with direct access to God.

For Mexicans she is much, much, more, and a profound player in local culture and spirituality.

The multiple images of Mary in SMA each represent different aspects of the Virgin.  Guadalupe, the most popular image of Mary, represents the birth of a new race and nation.  She is seen to be an actual person, not a theological concept.  For example, when I entered a taxi on a recent rainy day and asked the driver if he has avoided any accidents he replied  “Guadalupe has ridden beside me all day and her eyes have protected me.  With her here, you and I are totally safe.” 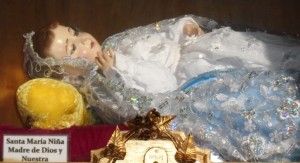 Another image of Mary largely unknown by foreigners is Baby Mary.  She is the baby doll seen in many local churches used to celebrate her birthday in September with parades of little Mary in all her finery.  Baby Mary is who women pray to with issues regarding pregnancy, childbirth and babies.

Guadalupe, Baby Mary, and many other Marian devotions displayed throughout SMA on buildings, in fashion and plastered on nearly every city bus reinforce the uniquely feminine nature of spirituality in SMA.  Jesus’ mother’s conception, birth, presentation in the temple, parents, parenting style, mourning of Jesus and her ascension into heaven are all strongly celebrated throughout the year reflecting her impact on both faith and culture.