So I’ve been reading Sr. Wendy books on art lately and came across a cool painting of Joseph and Mary’s trip into Egypt to escape King Herod’s murderous rampage of all the boys under two.  Sr. Wendy describes their faces as “ashamed because, ultimately, Joseph’s behavior was a cowardly act.”  Logic being if he stayed put and let Herod kill Jesus all the other baby boys would have been saved.

Now there’s a thought I never had!  Personally, I like the idea my namesake is not a coward, but to think that, and by a nun, was surprising.  On the other hand, had Joseph stayed put who is to say Jesus wouldn’t just be another corpse on the mound of infant corpses.

During the holidays on Insurgentes is a nativity the public can view that if you look closely, in a distant castle, you’ll find a window with Herod killing a baby to wrap that part of the story into the nativity display.

The Herod aspect features clearly in the SMA holiday season.  First there is the Day of Innocents on December 28th.  Think of it as Mexican April Fool’s Day where, if caught playing a trick on a pal, you declare “Innocente!” in honor of all the innocent boys that died.  Remember the joke was on Herod, as Jesus escaped! 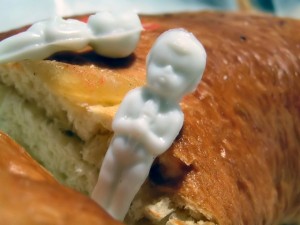 Then comes the bread on 3 Kings’ Day with all the hidden baby boys to indicate who is to host the Candelaria party in February.  The baby is hidden to represent how Jesus hid from Herod after the 3 Kings told Herod the greatest King of all was born and who they were on their way to see.

My favorite Christmas Carol, The Coventry Carol, is a 15th century folk tune told from the point of view of one of mothers who didn’t have a Joseph to whisk she and her baby out of Herod’s path of destruction.  It’s a moving song recorded by every singer of merit from Joan Baez to current pop stars.

As for Joseph’s flight being brilliant or cowardly I can only say we never really know how we’ll feel in a life or death situation until we are the ones in it.  Personally, I think babies are like chips and a demented lad like Herod would have a hard time stopping at just one.  I also think, as humans and fellow parents, there couldn’t have been a day that went by that Joseph or Mary didn’t think of the parents who lost their sons to Herod.