There is the old adage of if you want to hide something or someone, it is best to do so in plain sight.  This certainly holds true for the indigenous when building churches and wanting to appease the oppressive Spanish while also hedging their bets and placating their own gods.

Take the Oratorio, still considered the indigenous church and most active church in town.  Looking high up on the building’s exterior you’ll see what the Spanish clergy described as the feathered wings of St. Michael the Archangel, the town’s namesake saint.  However, to the indigenous, the highest deity was the feathered serpent, Quetzalcoatl, and those are his feathers rising above all else. 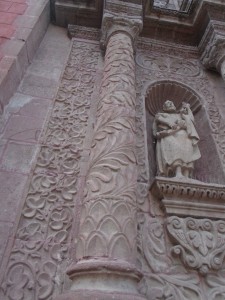 In case you forget to look up, observe the eye level columns that start out displaying the snake’s scales that then convert to his feathered plumes as the columns slither past Saints Peter, Paul, Philip Neri, John the Baptist and terminating alongside St. Joseph.

However, the Oratorio’s hidden messages in the building’s façade pale compared to the church’s next door, the Temple of Good Health.

I was always perplexed why this church’s exterior was concave instead of protruding into what was then the town’s main market and square.  Here the rare use of indented architecture represents a cave, the place where this world (earth) enters the afterworld.  The theme is continued inside at the pulpit where the bible is read.  The pulpit represents the entrance to the cave Jesus was buried in.

On the sides of the front door are what appear, to me, to be the Green Man of druid fame.  He frequently appears with his tongue out carved into trees and I used his mask as a clue on many Halloween scavenger hunt for my son’s childhood birthday parties.  But I was wrong, twice over.

First off, here he is actually the indigenous god of the sun, Tonatiuh, leader of heaven.   Mesoamericans believed the Sun God demanded human sacrifice as tribute and without it the sun would refuse to move through the sky. It is said that 20,000 people were sacrificed each year though this number is likely inflated either by the indigenous, who wanted to inspire fear in their enemies, or the conquering Spanish, who wanted to vilify the locals to excuse their own behavior.

Secondly, what I never saw before was that underneath the Sun God/ Green Man is the face of a much larger God of the Wind, Ehecatl.

Since the wind blows in all directions, Ehecatl was associated with all the four cardinal directions of north, south, east and west that also appear on the Virgin of Guadalupe’s dress. The Parroquia’s towering heights that appear to be upside down ice cream cones feature oval circles to allow the wind to pass through in all directions in honor of the Wind God.

Also look closely at the exterior stone work of our Lady of Good Health to view all the jaguar faces, the largest feline in the Americas.  Jaguars were the symbol of power and strength believed to facilitate communication between the living and the dead.  A handy animal to have around a cave, the portal to the afterlife.

Along the side of the church is what looks like a modified letter M which was the ancient symbol for rain.  Look up and along the roofline and you’ll see curves representing the rain that comes down from Heaven and enters caves to tie together both Heaven and Hell, with life here in the middle.

Among the rain elements are now headless images of Mary’s family tree starting with her pregnant (The Immaculate Conception), her parents (Saints Ana and Joachim), her adopted son St. John and her biological son, Jesus with his Sacred Heart.  Oddly, if there ever was her husband present he long ago gamboled next door to be the highest ranking saint on the Oratorio church.

All this symbolism of the ancient gods, saints, afterlife and caves is daily passed by visitors completely unaware of the subtle art and craftsmanship of indigenous masonry.