Having SMA dolls on my book covers motivated me to do some research on these little ladies, known as Marias after the Virgin Mary and I learned two interesting points.

One was how, in the past, the indigenous Otomi grandmothers taught their granddaughters how to sew by making dolls from old cloth.  Charming way to teach a life skill between generations, no?  Well, except that no one understood germs back then.  When the ladies used cloth from blankets that had been on those with infectious diseases, many a little girl became infected and met the Virgin Mary shortly after that.

Second point was how SMA and two neighboring cities (Guanajuato and Querétaro ) along the state next door, Michoacán, were in fierce legal battles to be the official home of these Maria dolls.  If one wins the right to be the official home of Maria dolls it is like having champagne from France’s champagne valley, otherwise one drinks “sparkling wine”.  Or in Mexican booze terms, enjoying tequila from the state of Jalisco (home to the city of Tequila) or sipping mezcal.

So far neither SMA, nor the others, has won the marketing juggernaut as all of the areas have been found to import their cloth and accessories used in the dolls from China.  Details, details…..

All this research led me to images of contemporary versions of Mexican dolls, namely Mexican Barbie.  I was fascinated how one site placed the Barbies in front of actual paintings of Mexican towns.  Well, that, and how the more indigenous looking Barbie is having a great time coming home from the market or dancing in the town’s central plaza.  Meanwhile the Spanish looking Barbie
simply appears irritated to be in Mexico, rather than Spain.  I had no idea one could alter Barbie’s smiling face based on location!  Lucky for her, Spanish 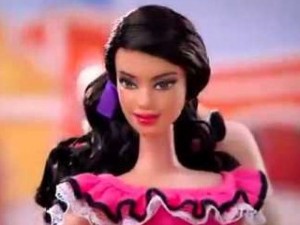 looking Barbie comes with her own passport!  Now she can hightail herself and her plastic Chihuahua out of Mexico if she ever learns to bend her legs to fit what is in today’s world airline seats with leg room just her size!