For my parents choosing baby names was made fairly easy by the Church.  Their first daughter was born in a Marian year (a year the Pope devotes to Mary) so she, like most of the girls in her Catholic school classes, was named Mary.  The rest of us got saint names followed by the name of someone my parents liked.  For me, that meant the most powerful saint followed by the most powerful priest in their parish, Joseph William. 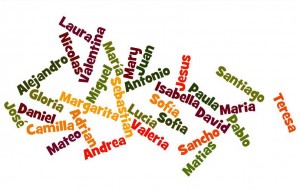 Naming a baby in San Miguel also has strong spiritual influences.  Until very recent history nearly all boys were named Jose (Joseph) and girls, Maria (Mary) for Jesus’ parents.  Often children went by nicknames, or their middle name, but on all forms Joseph and Mary dominated the name field.

Today there is more flexibility and here are some of the more common names you will find in SMA and their faith-based roots:

Lupe/Lupita  – These are for the Virgin of Guadalupe, the image of Mary representing the birth of the Mexican country and race.  Of the six women in a dance class I teach four are Lupitas.  The other two women are…..

Maria de las Angeles – The original name for LA, this image of Mary is named for the town in Italy she was raised into heaven from.  Angelica is a popular nickname.

Miguel, Rafael and Gabriel - The names of the three archangels, and my student’s Maria de las Angeles’ three boys.

Malu  – Short for Maria de la Luz (Mary of the Light).  The church and neighborhood behind the mall are named in her honor also.

Manuel /Manuela – A derivative from the word for mule, as in the one that carried pregnant Mary to Bethlehem.  It is considered auspicious to receive a toy mule on this day and so many were sold the toy makers started what today is the handmade toy fair in Plaza Civica in June.

Cecelia  – Ask any local Cecelia and you will likely learn one or both of her parents are musicians.  St. Cecelia is the patroness of musicians and the Oratorio church hosts a wide variety of music on her feast day.

Carmen  – From the Virgin of Carmel, the image of Mary wearing brown.

Rosario  – From Our Lady of the Rosary (Rosario).

Patricio – Patrick, or Pato (duck) for short, has made a recent local comeback.  The Patricios were a US military unit from Ireland that switched sides joining the Mexican Catholics.

For naming my own children, I broke with my parents’ saint tradition and opted for the Gaelic sounding Glennon, Greyden and Trevyn.  Since my dog was a Three Kings’ Day gift he got the moniker Gaspar after one of the kings.  See, even a SMA dog’s name has a faithful tale!