Who is Lupita Reyes?  A tele-nova vixen?  A Banda beauty?  Latest best-selling sensation to hit the Writer’s Conference?  Actually the appropriate question is what, not who, for Lupita Reyes is a euphemism for the holiday season spanning from the day for the Virgin of Guadalupe (Lupita) through Three Kings’ Day (Reyes).

Lupita Reyes is the culmination of a year in a grand celebration of Jesus’ birth and one of the loveliest and most culturally active times to be in SMA.

December 12th starts the holiday season with the feast day of the Virgin Guadalupe.  Guadalupe is the image of Mary that swiftly converted millions of indigenous with the inherent symbolism.  Basically, this Mary is visibly in the later part of her third trimester (she appears on the 12th and gives birth on the 25th of December) where she’ll give birth to both the new country of Mexico, and the new race of indigenous mixed with Europeans.

oon after start the Posadas where Joseph, Mary and the mule getting turned down at inns and having to give birth in a barn is lovingly recreated for nine days prior to Christmas.  Featured in the celebrations are piñatas with seven points representing the seven deadly sins.  Once the sins are destroyed with a club, the candy inside is rewarded to all.

hose pesky deadly sins also make an appearance in the Pastorelas, a yearly play making the nativity story both current and comical.  Featured are local teen characters that are forced to choose between the guidance of St. Michael (the town’s namesake) and the more appealing devil with his personifications of the deadly sins.  The sins are a comic element and normally are presented with a theme like being all flamboyantly gay middle aged men, or vixenish teen girls.

Christmas day is time spent in church and with family, not a gift giving affair.

A few days after is Day of the Innocents, or the SMA equivalent of April’s Fools.  If someone plays a trick on you and you call them on it, they claim “Innocent!”  This is in honor of how St. Joseph escaped to Egypt with Mary and Jesus to avoid being killed by Kind Herod.  The joke being on Herod as Joseph got his family away.

New Year’s Eve is SMA’s equivalent to Thanksgiving as families get together to give thanks for the year past. 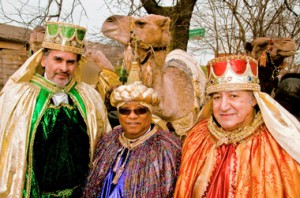 Three King’s Day on January 6th is when the Kings arrived to baby Jesus bearing gifts, so it is when local children get their presents.  Typically gifts are only for children and not exchanged among adults.

A special bread is served where a baby Jesus doll is hidden.  If you receive the slice with baby Jesus you host the Candelaria festival in early February marking the beginning of Spring but that’s another story as the time of Lupita Reyes has passed.

She’ll return to town again that December and to mark the next holiday season.