Once Upon a Time….

The most frequent question I get asked when giving tours and workshops on local faith and culture is “How do you know this stuff?”  (Often said in tone featuring the unvoiced question of “And why?”)

Once upon a time when I first arrived to SMA I taught English.  One of my favorite students was a grandmother named Mercedes.  One day Mercedes took me aside to ask if I would be her Danzon partner.  (I learned much, much later Danzon, not ‘dance on’, is a style of dance like salsa, cumbia and square dancing are.)

My response was I didn’t speak Spanish or know how to dance, so I didn’t really see the upside to partnering with me.  She replied, in a tone normally reserved for dim witted cats, “That’s OK, you’re a man.” 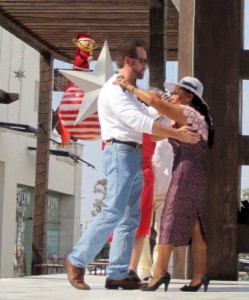 Eventually we got good (now I teach dance) and we performed in events in SMA and around the state.  These events were based around religious fiestas I knew nothing about, but wanted to.  Who were these virgins, saints and events I knew nothing about despite having been taught by nuns all the way through graduate school?!?

Luckily I’ve a patient Spanish teacher who helped me plow through primary research written in Spanish.  This not being fluent caused many hurdles.  For instance I read how local gals prayed to St. Anthony, patron of lost things, for their future husband who was obviously misplaced.  When the husband did not soon appear the ladies would “take a baby”.  I was perplexed why young mothers ever let their babies anywhere near their spinster brethren.

Eventually I learned it was they took the statue of St. Anthony’s baby Jesus which explains why today St. Anthony statues are placed up high, under lock and key in local churches.

Last Christmas I realized I had amassed over 80 stories on local faith and culture that were then compiled into a web site.  Knowing having a web site without promoting it is foolhardy, I started offering tours and workshops.

For the first tour, I really thought no one would want to attend so I planned on placating myself with a breakfast in the Santa Ana café.  Instead there were 35 people!  The second venture garnered double that at 70!

So today I offer more frequent workshop and weekly tours every Thursday and Friday in front of the Oratorio at 9AM.  It has attracted folks of all faiths, or none, to have a better understanding of what is going on around them while here in SMA.  In exchange I’ve learned much from such diverse folks as a household name retail titan, a headliner for gay cruise lines, Baptist minister, local former nun, Harvard professor, USAF pilots, art history teachers and a Broadway director.  I hope you can join the fun in learning just why those fireworks went off this morning or why traffic came to a standstill today!