The second most visited Mexican religious symbol is the Virgin of St. John of the Lakes, the most visited pilgrimage site in the Western Hemisphere located just south of Guadalajara.

Can you guess who the third most visited image in Mexico is?  I couldn’t until I joined a van full of fellow danzon dancers to go see a child version of Jesus called The Holy Child of Atocha located near the mines of Fresnillo, just north of Zacatecas.

Visually he is characterized as a boy pilgrim with a brimmed hat featuring a plume carrying a basket along with a walking staff, drinking gourd, and a cape affixed to which is a scallop shell, symbol of a pilgrimage to Saint James.  St. James is the apostle believed to have sailed off to Spain to convert folks to the new faith and was the first martyr.  His pilgrimage is walked by over 200,000 people each year in Northern Spain.

Originally the Child of Atocha was detachable part of a statue to Mary in the Spanish town of Atocha.  He was detached to accompany a woman about to give birth.

Then, in the 13th century, Spain was under Muslim rule and many Catholics were prisoners in an Atocha jail.  The prisoners were not fed by the jailers, but by family members who brought them food. According to legend, only children under the age of 12 were permitted to bring food. This rule was unfortunate for those men without small children who received no food. The women of Atocha prayed before the statue of Mary with the detachable Jesus to ask her son for help.

Stories soon circulated that an unknown child under the age of twelve and dressed in pilgrim’s clothing, had begun to bring food to childless prisoners at night. The other children said this boy’s bread basket never emptied, nor his water gourd.

The women of the town returned to the statue of Mary with the detachable Jesus to thank the Virgin for her intercession, and noticed that the shoes worn by the Jesus were tattered and dusty. They replaced the shoes of the Child Jesus, but those also became worn. The people of Atocha took this as a sign that it was the Child Jesus who went out every night to help those in need. 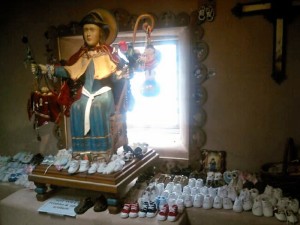 In time it became customary for devotees of the Child Jesus to leave baby shoes at shrines dedicated to him though in art he is normally seen seated.

The Spanish brought the legend to Mexico with them and he found a new place to toddle about at night in the nearby silver mines.  When miners were trapped a young boy would come with food and a way to exit the mine.  Each time this happened, the image of the child on the Virgin’s arms was found to be dirty and his clothes had little holes in them.

Today the Holy Child of Atocha is the symbol of Zacatecas and the protector of miners. Many make pilgrimages, often barefoot, at Christmas to bring toys to the child.

Today prayers to the Holy Child of Atocha come from those incarcerated unjustly including soldiers in World War II on the Bataan Death March. Known as the ‘little wanderer’, this version of Jesus is the patron of the abandoned.

Finally I understood who this image of Jesus was I see around town that I had assumed was simply a Jesus  dressed as Little Lord Fauntleroy!