Roadside Reminders of Appointments with Death

The crosses and concrete angels you see scattered along SMA’s highways are markers that commemorate a site where a person died suddenly and unexpectedly, normally in a car accident. It represents where the soul leaves the body and enters eternal life.  Unlike a grave site headstone, or a home based urn with ashes, which mark where a body is laid to rest. 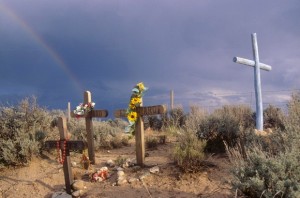 The roadside memorial is created and maintained by family members or friends of the deceased.  Featuring flowers (real or plastic), handwritten messages, personal mementos or toys for deceased children the memorial normally includes the name and dates of the deceased.  Often remnants of the car accident are still to be found nearby.

Roadside memorials (Descansos, or places of rest, in Spanish) remind travelers of their own mortality and that death is an event that arrives for a particular person, at a set place and time.

Descansos are also during a procession or pilgrimage and the statues being carried are placed down on spikes for a moment allowing the carriers a brief respite.  Descansos were also when a coffin was placed down on the trip from the funeral mass to the cemetery.  Luckily, in today’s world, coffins are carried in a car eliminating the need for funeral descansos as we all, apparently, put on some pounds in death.

The ancient Greeks started roadside memorials believing it to be an example of a civilized society’s approach to mourning.   Medieval Spaniards erected a cross on the roadside where a loved one died and brought the practice here.  In the past two decades the practice has spread north first in the border states then up into the rest of the United States and Canada.

Several US states have experienced lawsuits over roadside markers feeling placing a cross on public access highways mixes Church and State.  Others focus on the crosses being a visual distraction to drivers.  In other states it has become a battle between free expression of grief and public policy.

Here in SMA, the memorials are lovingly moved and returned to their original spot when roadside maintenance is required.  The practice reminds me of pal in the state of Georgia that had a cattle ranch located on what had once been a plantation.  His grazing fields featured several wooden markers to former slaves that had lived there.  Occasionally descendants would come to the farm to see an ancestor’s final resting place and my pal never had the desire to tell visitors the cattle frequently kicked down the markers which he placed willy nilly not knowing what fields the cows had kicked them from in their bovine notion of soccer.