Beatrice was a Portuguese lady-in-waiting to the Queen in the 1400s.  Having good looks that raised the jealousy of the Queen, Beatrice left courtly life to become a nun and was the founder of the monastic Order of the Immaculate Conception of Our Lady.  A small cloister of this order still resides at the Church of the Immaculate Conception, often called Las Monjas (The Nuns).  The local cloister was founded in 1754 by the teen aged Maria Josefa Lina de la Canal who was then the wealthiest bachelorette in San Miguel.  She died at 34 having created a cloistered convent for over 70 nuns.  Her church holds many notable paintings and images from the 18th century. 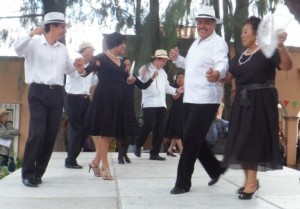 Today’s handful of remaining nuns prepare a vast array of flowers on the altar for the day-long celebration featuring food, music and dancing.  Most of the convent has since been converted into the Belle Artes cultural center next door.