Saint Catherine Labouré was a French nun in the mid 1800’s  who relayed the request from the Virgin Mary to create the Miraculous Medal.  The Miraculous Medal is an exceedingly popular image dedicated to the Immaculate Conception, worn by millions, both Roman Catholics and other denominations, including many in San Miguel.

The medal is oval in shape bearing the words, “O Mary conceived without sin, pray for us who have recourse to thee.”  The image of Mary stands atop a snake (Satan) and emits rays from her fingers.  Some fingers have no rays indicating the graces people forget to ask for.  The reverse side features a ‘M” for Mary plus an image of her heart and Jesus’ along with 12 stars (for the apostles) and a cross. 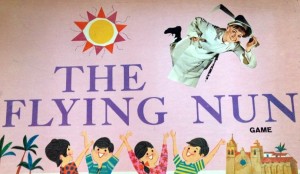 Statues in chruches of St. Catherine are easily identified by her headgear that was also worn by Sally Field in the 1960’s TV Show “The Flying Nun”.

Sidebar:  The clothing of nuns was originally designed to allow women to fit into contemporary Medieval society by wearing similar fashions of those not in a religious order.  Fashions changed but often the wardrobe of a nun remained locked in a certain era’s couture.