James was one of the Twelve Apostles of Jesus, and the first apostle to be martyred. Once beheaded by Herod Agrippa himself, his body was taken up by angels, and sailed in a rudderless, unattended boat to Spain where he had converted locals earlier in his life. His is the patron saint of Spain and pilgrimages to his grave have been the most popular pilgrimage for Western European Catholics from the Early Middle Ages onwards still drawing over 100,000 pilgrims each year. 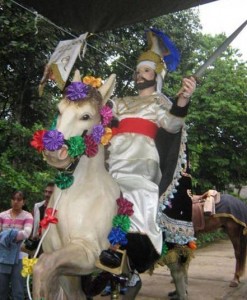 St. James is said to have miraculously appeared to fight for the Catholic Spanish army against the Moors. Since then his name has been a battle cry for the Spanish armies and was used again when the Conquistadors fought the indigenous Mexicans in the 1500s.

Masked dancers take to the streets on July 25th to reenact the acceptance of the indigenous to the Catholic faith. St. James is particularly popular in the smaller villages surrounding San Miguel, including Atontonilco. Chapels frequently are named in honor of St. James, and include the image of James on a horse fighting for Catholic Spain.