You may notice a recent influx of camera carrying cowboys and cowgirls passing through the jardin on their horses.  Chances are, they are going to, or coming from, a festival for Saint Martin of Tours (France), or San Martin Caballero as he is known locally.

Several thousand cowboy pilgrims travel from all over Guanajuato in November to congregate for a mass on their horses in the small town of St. Martin about 30 miles from San Miguel de Allende on the way to Guanajuato.  In honor of Saint Martin, the horses receive special blessings following their long ride.

St. Martin was born in the early 300s, the later part of the Roman Empire and served in the army.  One day, while riding his horse, he chanced upon a nude beggar and cut his cloak in half to give the poor man a covering. That night Martin had a dream in which the beggar appeared to him as Jesus, so he quit the army and became a monk. Saint Martin is the patron saint of those who hope strangers will aid them.

In art, Saint Martin is pictured cutting his red cloak in half while on a horse and a nude man is on the ground receiving the cloak.  You can find this image on candles throughout town in many shops, whose owners invoke Saint Martin since they rely on the kindness of passing strangers for their livelihood.

When St. Martin died, the remaining half of his cape (that he kept as it was a required part of his military uniform and God doesn’t ask for more than you can give) was considered miraculous.  A small church was build to house the cape and the Italian word for cape became the origin for the word ‘chapel’. 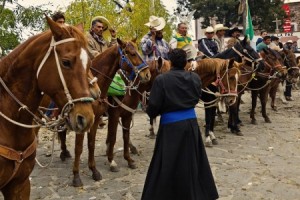 The popular amulet for Saint Martin here is a horseshoe, though unlike the Irish custom of keeping the ends upright, St. Martin’s horseshoes are hung with the ends pointing down and provide money or business luck.