Stations of the Cross in San Miguel de Allende 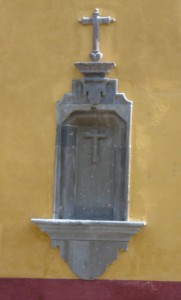 During Holy Week are countless processions devoted to depicting Jesus’ death.  One of the oldest, that started in Colonial times, follows the route of the Stations of the Cross built into the buildings of San Miguel.  The stations start from the Santa Escuela (next to the Parroquia) and continue on the streets of Juarez, Mesones, Nunez and San Francisco to end at the tiny chapel of Calvary on the corner of Real de Queretaro and Calvario.  Inside the chapel is the image of Jesus with painful anxiety on his face for his forlorn solitude.

Stations of the Cross (sometimes referred to as Way of the Cross or Via Crucis) refer to a series of artistic representations depicting Christ carrying the cross to his crucifixion.

Churches typically place Stations of the Cross at intervals along the side walls and are reflective of the artistic culture where the church is located. The tradition of moving around the Stations to commemorate the passion of Christ began with St. Francis of Assisi. It is most commonly done during Lent, especially on Good Friday.

The object of the Stations is to help the faithful to make a spiritual pilgrimage of prayer, through meditating upon the chief scenes of Christ’s sufferings and death. It has become one of the most popular devotions for Roman Catholics.

Traditionally there were 14 Stations of the Cross, but Pope John Paul II added the Resurrection as the fifteenth.

In many of the ingenious chapels surrounding town the Stations of the Cross are marked in the front courtyard of the church for it was outside that the indigenous preferred to worship.