The Gal Well Worth 200 Pesos

One of the most significant figures of Mexican history wasn’t a conqueror or a ruler, but a 17th century nun known for her charm, beauty, and wit.  Also for being a self-educated genius who composed poems that were the most important body of poetic work produced in the Americas until the arrival of 19th-century figures such as Emily Dickinson and Walt Whitman. 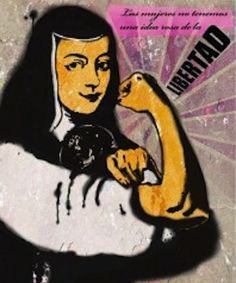 All her accomplishments were during the Inquisition when women had few options to thrive in academic or artistic fields and the subjugation of women was absolute.   Despite the barriers, this small nun greatly impacted both Mexican culture and faith to this day.

Sor Juana Inés de la Cruz (Sister Joan Agnes of the Cross) was born in 1651 of a Spanish father she never met and a mixed race mother.  By three years old she was a self-taught scholar and savant.  Juana became a “lady in waiting” to the wife of the viceroy and attracted in succession three wives of the most powerful men in New Spain as her patrons, all of whom offered her protection otherwise unavailable to a woman.

Juana became a nun after five years in the royal court though her convent life was not what we might picture.  She owned her own quarters in Mexico City with an extensive library and collection of musical instruments, plus a female slave, common at the time.  The convent was a social center where a famous poet, albeit a nun, could receive equally distinguished intellectuals, clerics and royalty.

Her writings enhanced the spiritual profile of the saints, an important aspect of Mexican faith to this day.  She also depicted the Conquest as a convergence of indigenous beliefs compatible with Catholicism.

In 1693 the most distinguished poet of her time disposed of her library and instruments to enter “the silence” and never write again.  It is unknown if the decision was hers alone, or forced upon her by Church leadership.

She died at the age of 47 after ministering to other nuns stricken during a plague in 1695.

Sor Juana Inés de la Cruz’ present day impact on SMA is both educational and financial.  Her name adorns local schools of all levels.  Her image is featured in the mural of Mexico’s history at the

Allende Institute.  Most viewed is her likeness featured on the 200 pesos note.  The paper bill contains her famous quote (in very tiny print) deploring the stupidity of men who question the intellectual capacity of women.