The Nature of Faith

Gringos often move to SMA for the climate.  Well, coming from a long line of Gaelic vampires this constant sun and warmth holds no more appeal to me than a continuing battle with melanoma for being stupid enough to be awake in daylight hours.

Not so with the indigenous population of what is today SMA.  The early Jesuits had difficulty converting natives to the Catholic faith mainly because they didn’t grasp the spiritual influence of nature immediately.

Ever notice as the oldest chapels around SMA are quite small with large fenced courtyards?  That is because only the Spanish would worship God inside.  To the indigenous God is found in nature, not in a building.  So the Spanish were in a cramped building while the local Otomi and Chichimecca tribes celebrated mass outside, where God was.

Have you seen all the double lined crosses atop churches around town?  (Perhaps not with your eyes on the pavement.)  The smaller top line represents the sign announcing Jesus was “King of the Jews”.  In Latin, the initials are INRI.  As a child I memorized this sequence of letters as representing INRI as “I’m Nailed Right In”.

Hungarian King (later Saint) Stephen used this cross in battles.  After winning many the double cross became part of the national flag of Hungary, and still is.  For WW2 buffs it is the symbol of a free France.  For donators to the TB Society it is their logo.  Here in SMA it represents something else entirely.

The early Spanish wanted to attract the indigenous to church.  To natives, this double cross represented the intersection of the male and female, which is the Divine, or God.  By placing the cross outside the church the locals might actually approach. 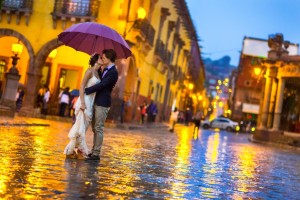 To many Northern neighbors, controlling the weather is a sign of civilization and power.  We live our lives in temperature controlled homes, drive around in cars with AC and heat to get to properly tempered stores and offices.  Chatting with a pal that runs the local Spanish school for gringos she couldn’t understand why often on the first day of class students were in a tired and foul mood.

My theory was the student likely spent the first night of their lives sleeping in a room with open windows.  Suddenly they heard the sounds of traffic, roosters, early morning fireworks and much else that had always been muffled silent by double paned glass and the hum of cooling systems. 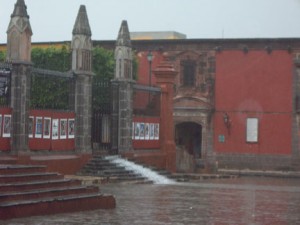 From when the sun is closest to earth (called canicula in mid August and a bad time for the elderly to get ill as the earth is extra warm) to when the rainy season for crops is, to be in SMA is always to be one with the weather.  Again, because in nature is where God is and isn’t outside where you should be too?