SMA is filled with magical creatures and I’m not even talking about the people.  There are two heavenly creatures featured in SMA art that though they sound alike, and can somewhat look alike, are very different in history, faith and intent. 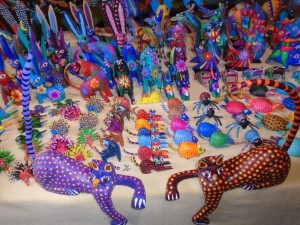 Alebriges are the colorful and carved wooden folk art available at every craft fair and at Blanca Gomez’s shop on Lareto by the Artist’s Market.  Originating in Oaxaca, the copal or cedar wood figures are normally cats, dogs, deer, raccoons, leopards, etc., that have been elaborated into fantastic figures.  They started in an artist’s nightmare  where he awoke screaming the word “Alebriges” and started carving a folk art niche.

Creatively carved by the artists’ hand, no two pieces will ever be exactly alike.  They have became hugely popular folk art collectibles in the US, Canada and Europe.  Here in Mexico both Diego and Frida collected them.

Alecuijes, on the other hand, are an animal personification of actual people so no two are also ever alike.  Alecuije is the integration of your gifts, talents and virtues that mirror your soul.  Prehispanic Mexicans considered that animals had a close relationship with Divine so on your birth day you arrived with a spirit animal. 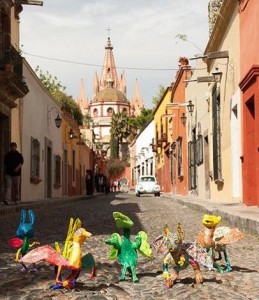 All Alecuijes feature a head, body, hands, feet, tail and wings of various animals that fit the person depending on the date of birth.  For example, a bear’s head represents all your thoughts, though the head, like your thoughts, change yearly.  The body, how you integrate into the world may change each year also.  The feet and hands provide balance to stand on earth and move in different scenarios while the tail is past (the only part of the body that never changes).  Wings are strongest part to propel you into the future.

Alecuije is the integration of your gifts, talents and virtues that mirror your soul.  Local artist, Paty de Murga, first became aware of Alecuijes while visiting Canada de la Virgen before it became an open to the public historic site.  While there she met an indigenous woman who introduced her to the magical world of Alecuijes that Paty now makes on a commissioned basis for people and museums around the world.

The Alebrijes  and  Alecuijes art of San Miguel travel the world but only while here you can find our own magical creature.  Taking one into your home reminds you of both the spiritual history of SMA, and yourself, in the form of animals like no other art can.