Recently I was invited to tour Comonfort’s churches by the state’s Director of Tourism interested in forming a state-wide tourism effort of the indigenous influence on our churches.  Having had my students from nearby Escobedo perform in Comonfort I’ve seen the churches but not through this man’s eyes so if you ever go to Comonfort for pots and garden supplies you’ll want to visit some of the churches.  You’ll see several interesting things like….

The Virgin of Remedios church built high on a hill lined with several levels of ascending height by the railroad.  It is the home of several archeological projects in the works but I hadn’t realized the various levels weren’t for outdoor services, but rather the most obvious example of building a church on top of a step pyramid I could ever imagine.

The main church in town is for St. Francis of Assisi.  To the right of the main altar columns of corn hold up the building as a way of incorporating the indigenous belief that corn was the beginning of life. 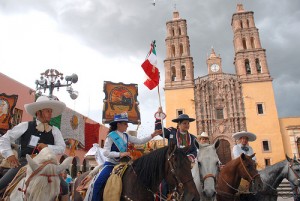 The director was exceptional good at also pointing out the devils beneath Mary and the saints to make clear your choice between going to heaven or hell.  At first, I could not see said devils until the guide took photos with his camera and when all the other baroque accessories didn’t feed my mind’s eyes, it was painfully obvious the lustful devil lay beneath the feet of the saints and Mary.

Flanking the altar, in a clock like fashion, you can see paintings depicting the lives of Mary and Joseph.  Mary’s I could easily follow from her Immaculate Conception to Assumption into Heaven.  Joseph’s life I found more visually perplexing with the painting of Jesus’ circumcision (a big day for Jesus, I understood, but Joseph?) to Joseph’s death in the summer of Jesus’ 17th year (being Jesus’ step father death could

not touch Joseph, until Jesus touched the side of his face saddling Joseph forever being the patron of a good death.).

The most fascinating arrangement was various saints set among mirror-laden art.  Still well above head height was a mirror with a downward tilt in which you can see yourself looking at the art.  When sunrise comes in through an across the church window the mirrors add to the allure of the pink sunrise as the light scrolls down.  The light then stops at your reflection in the mirror to display to the indigenous of Comonfort that you, too, are to be in heaven among the saints.

Well, is that not a lovely thought eloquently communicated without a single word?