Dancing With the Devil

When teaching dance part of what I enjoy is doing choreographies to songs in English that feature Latin rhythms.  For instance, most pop songs in English are cha chas.  For danzon, I like to use the song That Old Devil Called Love.  It was a popular 1940’s ditty that had a resurgence in the 1980’s telling the story of a women’s lament that an old devil is back in her life to lift her up, then tear her down.  However, no matter what, she’ll always return to this devil because his name is Love.

Slowly paced, the song is great for more intricate danzon passes and for added theatrics the man dresses as the devil with plenty of time to twirl his tail or poke his pitchfork at her.  However, I’m constantly amazed that despite the abundance of devils in town, particularly around the holidays, the men don’t want to be seen dressed as devils.  However the men, and the women, in the crowds watching completely enjoy the tall gringo dressed as the devil jokingly teasing his smaller, Mexican dance partner!

The devil and the holiday season in SMA have a long history together.  Guanajuato is one two states in Mexico that often feature the devil in nativities.  (Oaxaca is the other.)  According the president of the International Crèche Herald, a crèche collector’s bible, there are two theories for this.

One, the devil tried to distract the three kings on their trip to meet Jesus.  When that failed, the devil joined the kings in their travels and was present at Jesus’ birth.  Two, the devil knew his rule on Earth was over so he came to Jesus’ birth to give up his control.  Either way, it can be off-putting to see a life size nativity with a dancing devil surrounded by actual flames next to the baby Jesus.  But Satan doesn’t just stay in the manager over the holidays, he’s all over the city! 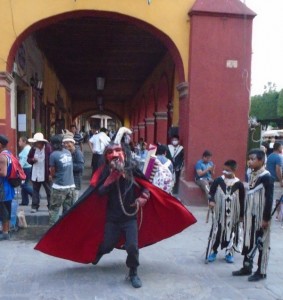 For instance, following a danzon presentation in the open air market for the Virgin of Guadalupe which starts the holiday season, we dancers were sitting and resting while a mass was performed before doing our second show.  Noemi, arguably one of SMA’s best danzon dancers, was caught up checking emails on her phone and missed when the priest entered the crowd followed by a Holy Water carrying devil.  Into the devil’s bucket the priest dipped his wand to then bless the holiday season crowd.  When the water struck Noemi by surprise she nearly fell off her seat with her jerky reaction.

That gave me the opportunity to lean over and whisper “That was a mighty violent reaction to a couple drops of holy water!”  while reminding her that when you dance with the devil, you don’t get to pick the Toone.