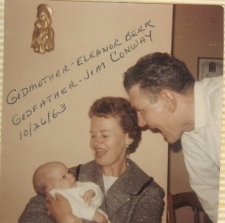 That’s me as a baby being startled, grabbing my tiny heart, by the sudden appearance of my godparents on my Baptism day.  Unbeknownst to me it would the first, and last, time we ever met.

Not so in SMA, as here being a godfather is work for life, much like in the Godfather movies, though with a tad less bloodshed or Diane Keaton.

First off, if asked to be a godparent, one must sacrifice an entire Saturday afternoon for training.  Don’t speak Spanish?  It don’t matter, attendance is mandatory and strictly enforced so don’t even think about sneaking out after roll call.  Even before the class one must fork over copies of your baptism, first communion and confirmation certificates.  Though my mother lacked the energy or interest to fill in a single page of my baby book, god bless her, she was a pro at stuffing in related paperwork like this.

Heck, judging from the pictures of the baptism party, the only thing my godparents had to do was lead the limbo line!

Speaking of limbo, me, and my subsequent kids, were baptized the weekend one got back from the hospital to avoid even the slightest chance of crib death and condemning your offspring to eternity in Limbo  (the land of unbaptized babies in the afterlife).  Granted, that was eliminated by the time I had kids but until recently there was still Purgatory which is where I assume all those Limbo babies squatted, eternally.

When I was old enough to be a Godfather I was for various children of my siblings and pals while my main role was to be around if both parents died to be sure the child was raised Catholic.  This theory was silly even by my birth as who was going to split up siblings over an army of godparents when grandparents or aunts and uncles were still alive? 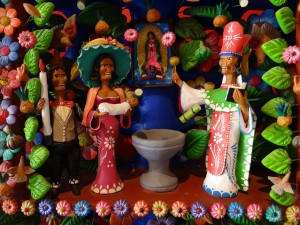 Here that isn’t so much the point as your continued presence throughout the baby’s life.  Sure, there are the financial obligations of sponsoring certain birthdays and other spiritual events, but that’s only part of the process.  You are to help obtain education and employment opportunities otherwise unavailable.  Worse yet, you are to be a sympathetic ear and family mediator during those awkward teen years.  As an octogarian pal recently commented “Once I became a teen I thought my parents were so, so stupid.  It wasn’t until I turned 40 they got any brighter!”

Babies in SMA take more of a Mexican approach to timing a baptism.  Knowing that turning 3 is celebrated in honor of Mary’s parents presenting her in the temple, you are pretty much in the clear until then.  For lad from Chocolatetown, USA use to seeing gerbil-looking babies get baptized it is unsettling to see baptism babies will full sets of teeth and the ability to walk and talk!

Godparent, or spectator, never decline an opportunity to attend a baptism.  Who knows?  You too may get to do the limbo!