You find yourself at the local Corpus Christi festival, or one of many others in Valle De Maiz and elsewhere in town, when suddenly a dancing dragon appears.  Well, this dragon is not like Puff, the Magic Dragon, but a kind of dragon-ish creature.  Often with a lion’s head, tortoise shell body and snake like tail.

He embodies the legend of St. Martha helping to dispel earlier indigenous gods and goddess in favor of the new Catholic faith.

In the bible, Saint Martha was a pal of Jesus’ and the aggressive middle sister to her siblings Lazarus and Mary.  At one point Jesus comes over for dinner and Martha is vexed her sister, or the men, aren’t helping her prepare the comida.  Jesus shocks her out of her anxious fretting about meal preparation (she is now the patron saint of cooks, waiters and waitresses) by stressing she should simply be enjoying Jesus’ company.

In Martha we see ourselves — worried and distracted by all we have to do in the world, especially at dinner time, and forgetting to spend time with Jesus.

According to legend, St Martha moved to France following Jesus’ death.  Her new village was having problems with a dragon named Tarasque.  Saint Martha found the beast and charmed it with hymns and prayers, and led back the tamed Tarasque to town. The villagers, terrified by the monster, attacked it. The monster offered no resistance and died there.   Martha then preached to the people and converted many of them to Christianity.

The story of the Tarasque is very similar to the story of Beauty and the Beast and King Kong. The monster is charmed and weakened by a woman and then killed when brought back to civilization. 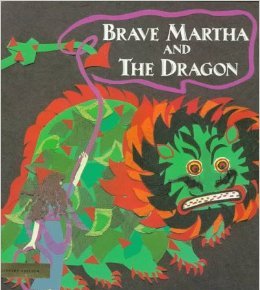 The dragon was a metaphor of the hostile pagan world that frustrated the early Church. St. Martha, in this respect, represents the Church that boldly challenged the powers of fallen gods. Her legend came with the Spanish to SMA, and all of Mexico.

In addition to the occasional dancing dragon’s appearance in fiestas, you’ll find biblical quotes about St. Martha in the cemetery as even in death we all can relate to the frustration of bringing dinner to the table!