The cult of St. Anne, Jesus’ Grandmother on his mother’s side, impacts much of what we do daily in SMA and around the world. 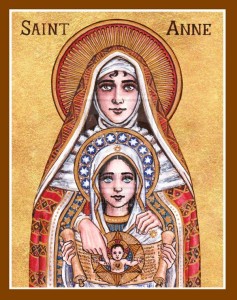 Anne (Anna, Ana, Ann, Hanna, etc.) is never mentioned in the bible by name but that never stopped early Catholics from giving her a back story including multiple marriages, children and along with the Son of God, starting a dynasty that includes many saints.  This image influenced many princesses, nay, future queens (particularly French ones) to be named Anne in honor of their duty to be prolific and influential.  St. Anne literally became the personification of dynastic success.

Add that to her image of an educated woman who not only taught Mary how to read, but became the symbol in art for storytelling.  So much so orders of nuns used her as the reason why nuns needed an education when it was often denied the fairer sex.

St. Anne was assigned a lot of extravagant attributes and was one of the reasons Martin Luther’s fury was provoked to start his Reformation.

Portrayed as a matriarchal source of wisdom and the founder of a mighty dynasty the Hebrew name Anna became linked with the Old German word for grandmother, that itself linked to the Greek and Latin for old woman.  The affectionate English word Nan for Grandmother, echoes the use of the word Nanny for caregivers and storytellers of children like the role Saint Anne traditionally plays in art.

Anne as the proverbial storyteller to children is how Mother Goose became the doddering, elderly reader of fairy tales that quickly gained fame with the invention of the printing press.  Anne also evolved the notion of an older female gossip that actress Maggie Smith built her career around.