Life as a Dead Muppet

For the recent Day of the Dead festivities in San Miguel de Allende I was bestowed an honor foreigners don’t normally get to embrace.  I was asked to be a mojiganga, one of the large papier-mâché puppets with long floppy arms that dance all around town.

Brought over by the Spanish to teach the indigenous the lives of the saints the mojigangas led every procession using their long arms to remove any evil spirits from the streets before the arrival of the religious statues and priests.  Later the puppets became parodies of the wealthy Spanish and today are largely used as giant brides and grooms leading wedding processions to the rehearsal dinner.

For me, I was very excited to be a mojigangas and had planned on being a busty and lusty female figuring I’ve already had 50 odd years being a man.  But when I saw the Catrina and Catrin (male skeleton with top hat) available to me I saw the comic possibilities of the Catrin having a male voice over being a mute female. 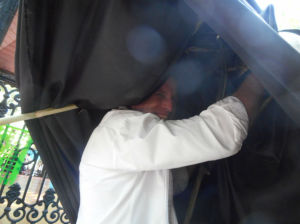 Inside a mojigangas is a whole different world and it’s a hot one!  Small wonder the puppet masters are normally sinewy adolescents and not middle age men.  Lined in wood and laced with bike tire tubes to provide bounce, the tubes fit with the snugness I can only assume Jane Russell’s Cross Your Heart bras once did.

It pays to have upper body strength as the puppet’s head towers over you and is heavy.  You also have to imagine yourself as if in one of Scarlet O’Hara’s antebellum dresses that flared out because you can only see dead (pun intended) ahead.  You can tell when you are brushing up against someone but that’s nothing compared to getting your top hat stuck in the Day of the Dead flags.  The flags remind the living of the thin line between life and death and they did their job by constantly stopping and pushing me backwards! 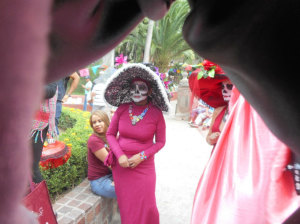 With little girls I approached them asking if they wanted a boyfriend.  With older girls I asked if they wanted a new husband.  Both groups giggled a lot!  Occasionally a little girl would embrace me in a big hug allowing me to experience the glow Snow White must feel daily at Disney.

For dogs and babies, normally my core audience when not a towering skeleton, I was greeted like a walking car accident.  They found me oddly fascinating but didn’t want anything to do with me.  Both sometimes growled.

At this point the police arrived as the Catrinas, all being artists themselves, were meticulously applying their multiple layers of makeup.  It appears the morning spent doing chalk drawings and building an altar was wasted time as our permit only allowed the group on the upper sidewalk, not down below in the park itself where we were.

Well the group’s leader was a dead Frida and she is as tough as the living Frida was.  When the conversation got heated the police threatened to arrest the group.  It was here my papier-mâché skull flung around like Linda Blair’s head to pay more attention.

“Go ahead!” Frida hissed “I am sure it will make some pretty pictures that you are arresting 15 Catrinas and one giant Catrin when the mayor arrives for the dedication.”  “Wait” I thought “Oh crap, the giant Catrin would be me!”  I can only see out of a tiny slit in cloth about puppet belly button height and I’m thinking what objects could be inserted there in a Mexican prison.

Luckily, like I said, dead Frida is tough and the police left so the buzz of applying eyeliner and foundation refilled the air. 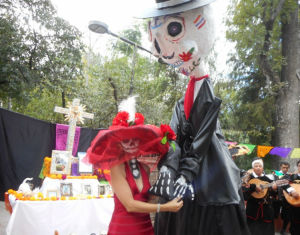 The only other dicey situation was walking up the steps for the dedication of the site for local artists who can’t afford their own gallery.  Here in the park they can sell their works on the weekend.  However, I can’t see the steps and those into Parque Juarez are in decay.  It took several assistants and goat like dexterity to make it up, then back down.

Next came a procession with a tuna band.  A procession is a faith based event, versus a parade being a civic or military one.  Since we ended with a ceremony at an altar for catrina Frida’s deceased sister, this is definitely faith based.

Luckily, being a dance teacher, I know enough music and steps to entertain myself except without hands (I can never find my puppet ones to lead with) I, like Billy Idol, am dancing by myself.  Getting a bit bored I decide to work the crowd again, this time targeting cell phone users too obsessed with their call to view my stumbling approach and towering form lean over them.  Noticing a top hat shape shadow the caller would normally turn around and scream!

Since it was all in good fun, it was a real crowd pleaser.

A different type of pleaser was during a more serious ceremony at the altar when I felt a hand on my back.  Thinking it was an indication for me to stand still I did as the hand traveled south and towards the interior.  I assumed it was one of the Catrina gals having some fun but learned later it was actually an older man I didn’t know that disappeared into the crowd.

Who knew mojigangas were a sexual fetish?  I learned this type of fondling in a crowd is not unusual for puppeteers and it made me wonder if folks did the same type of stuff with mascots.  I’ll never look at the Nittany Lion in quite the same way again.

The event ended with eating bunnies and beans.  Thumper, as always, tastes gamey and I was grateful I was game to be a tall, dead dandy!