Ancient artists painted cave art of humans, animals and other scenes that can still be viewed locally so there is no need to travel to Lascaux, France to see the more famous cave art.  Both local caves are of similar size featuring art with comparable aesthetics and themes.  Both caves require the stamina of a billy goat to get to.

One is located deep in a canyon not far from the pyramid requiring the aid of a local guide to find.  The other is on a mountain top adjacent to the highway to Comonfort. 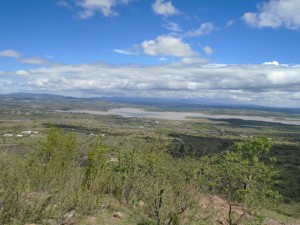 The second location is somewhat easier to access if only because in the 1980s an attempt was made to make the area tourist friendly.  Great time and energy was spend making paths, picnic pavilions and bathrooms that have all long since fallen into disrepair from disuse.

The views from the mountain top are magnificent featuring a panoramic view of city and the lake.  You can even see the church steeple that pierces the water line as the rest of the chapel remains submerged ever since the area was flooded when the damn was build to form the lake.  You can also clearly see the old bridge next to the highway where practitioners of the dark arts continue to hone their craft underneath. 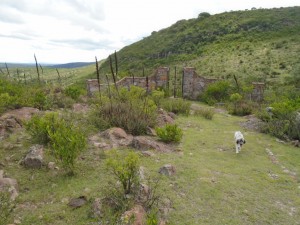 Once you reach the apex there are gates I dubbed “The Gates to Hell” feeling that other than the young, burly Air Force pilots there is nobody I’ve had on a tour that could make it this far.  Passing through the Gates of Hell the trek really got dicey as you scaled down a rock ravine and through crevices one can only manage only on all fours.

Finally, the cave art appeared.  Both sites feature dancers and four legged animals still faintly visible and done in organic red paint long before the Spanish arrived.  This site was unique in that the male dancers were apparently well endowed which may be the exact reason the lads climbed such heights to permanently record their assets.

I wondered why anyone would go to such lengths to artistically express themselves but in all fairness, in what is considered middle age today, I am probably already twice the average lifespan of the then native population.  In my defense even my dog, Gaspar (he was a Three Kings’ Day gift, hence the name) started to cry from exhaustion which I had never heard him do before.

The ancient people who once inhabited the area of today’s San Miguel de Allende left very little behind for modern archaeologists to pore over. There are scant references to their languages, rituals and customs by the conquistadors and friars who colonized and spread the Catholic faith to the region.

Perhaps some indigenous escaped to this mountainous region to resist Spanish rule by living where they had water, plants and animals to feed themselves.

Researchers have not yet been able to precisely date the paintings but further testing on samples of the pigments could reveal the age of the rock art.  I assume the drawings depict religious themes or simply how people then lived.

I become flummoxed when I don’t understand what is going on around me and why I so enjoy learning local history and culture.  Cave art I may never be able to fully understand but I’ve tremendous respect for anyone that makes that climb while also carrying art supplies.  They truly had something important to communicate.