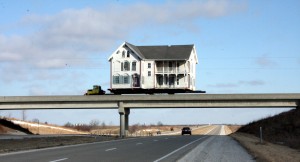 My best childhood pal grew up in a generations old farm house built by his ancestors on what were once dirt roads and by the 1970’s a busy intersection where cars occasionally spun off the road and into said house.  Consequently his safety obsessed parents opted to move the house much, much farther back from the road.  My child’s mind was fascinated on how you could simply pick up and move a house much like my sisters’ did with Barbie’s Dream House. 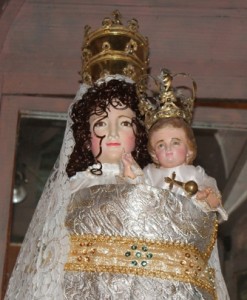 Back in Colonial times rich Spanish families in SMA adopted a Virgin or Saint to represent their family and the local Canal family opted for the relatively obscure image of Mary in Our Lady of Lareto.

Mary of Lareto referred to the legend where the home Mary grew up in, then raised Jesus in, was flown by Mary and her angelic movers from what was then war-torn 1200’s Middle East to Lareto, Italy.  Because the trip was a cumbersome one, Mary lost her arms in transit so the image of an armless Mary in SMA is easily identifiable both on street named for her, Lareto, and throughout town.

The Canals recreated Mary’s house in Lareto into a side chapel of the Oratorio Temple.  They painstakingly imported the dimensions and building materials to faithfully recreate her home, except for the fact they deleted the theatrical “fourth wall” to imply how Mary’s home always had open arms for the faithful.  Understandably proud of their chapel, Mr. and Mrs. Canal are buried beneath it.

After giving countless lectures and tours on local faith and culture I’m used to seasoned travelers insisting they saw Mary’s house in Turkey and, yes, they did.  Following Jesus’ crucifixion the ladies left town.  Saints Martha and Mary Magdalene opted for France while Jesus’ mother ventured north towards today’s Turkey where her home is now a shrine; much like my parent’s had to Mary’s honor in our childhood back yard.

couldn’t generate interest in.  Fascinated by the opportunity, I quickly peered in the windows and saw my childhood kitchen which reminded me how lucky Mary, and her parents, were to only have had only one offspring.

As I gazed at the Barbie Dream Home sized kitchen that made the Virgin of Lareto’s eating area in the Oratorio look spacious, I was dumbfounded to imagine how my parents fit a multitude of children and grandparents in such a small space.  It couldn’t possibly be the notion that I’ve gotten bigger since then!