Notre Dame has the Fighting Irish, Pillsbury that chuckling dough boy, and Kellogg’s got Tony the Tiger of “They’re Grrrrrr…eat” fame.  When I was in my brand new 1960’s grade school it had the Holy Name of Jesus’ Jets, a far more modern mascot than the high school’s Crusaders, which I didn’t realize until much, much later wasn’t really a term of endearment to most.

For San Miguel’s role in the War for Independence from Spain Fr. Hidalgo plucked the image of the Virgin of Guadalupe from Atotonilco to be the insurgents’ mascot and proof that God’s mother was on their side of the revolution.

But did you know the Spanish side had their own Mary supporting them too?

She was the Virgin of Help (Virgen de los Remedios) a Barbie-sized image of Mary brought to Mexico by the conquistadors. According to legend, one of Cortés’ soldiers, Gonzalo Rodríguez de Villafuerte, was carrying a small image of the Virgin Mary and hid her under one of the maguey plants in order to retrieve and pay homage to her later if he survived. (Hence, she is readily identifiable as the Virgin normally depicted atop a maguey plant.)

Though, ultimately, the Virgin of Help was on the losing side she still is of great importance in Mexico having a large national park named for her outside of Mexico City.  Locally, it is the nearby 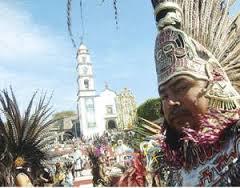 town of Comonfort, famous for its affordable pots and other garden supplies, that hosts a church to her image alongside the railroad tracts.

If you are intrigued by the notion of joining a pilgrimage but are loathe to spend nights sleeping outside after walking, or riding horseback, all day you may enjoy the pilgrimage to the Lady of Help.  Normally a seven hour walk on the first of September, the weather is pleasant, and you can be back home in time for comida. 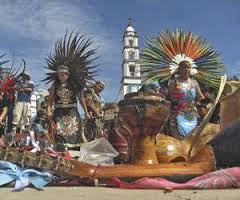 Or you can stay longer in Comonfort and enjoy several days of indigenous dancing, fireworks and celebrations in honor of the Marian mascot that wasn’t as much help as the Spanish would have liked.  But as anyone who has spent as much as a day in SMA knows, it’s a fool’s errand to go against the ever-present Virgin of Guadalupe, the Mother of Mexico.