As a child marionettes fascinated me.  My pals and I would do puppet shows during summer vacations so when the Muppets hit popular cultural shortly thereafter we were enamored with Miss Piggy, her Kermie and their pals. 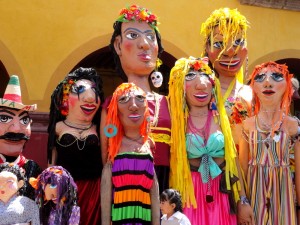 So it was easy for me to arrive to SMA and instantly like the mojigangas, the large papier-mâché dolls with the floppy arms that are out and about for fiestas and virtually every wedding.   Their head and bust are made from papier-mâché then mounted on an internal wood and mesh wire frame.  Rubber tubes are placed to give the puppet a bit of bounce to their towering height.  A dress then drapes the torso and legs while a dancer inside the costume then becomes the puppet’s feet.

The tradition started in colonial era Spain as characters in live theater and came across the ocean to Mexico.  Started by the local Spanish to teach the lives of the saints, mojigangas transitioned into a way for indigenous artists to poke fun at the vain Spanish. These mojigangas with their towering mantillas and flamenco style dresses are still seen on our cobblestoned streets advertising for local businesses.

Plus the skeletal Catrina mojigangas are a popular mainstay even long after Day of the Dead.

However, the most popular giant puppets are the bride and groom that dance at nearly every destination wedding SMA has become infamous for.  The giant puppets lead the startled and captivated wedding parties around town as the guests drink and the music plays.

One of my dance students’ families creates the mojigangas and it still a bit disconcerting to be visiting at her home and see one of the mojigangas’ lifeless bodies simply staring down at me from a second story window!  Those gals always have their eye out for a party that could be about to start!