When my children were young evening prayers settled on their litanies of what good things happened for them that day.  It was followed by my asking “Why say thank you?” and their rote response of “Because more good things come your way.”

These license plate sized tins of folk art were then placed at the church as a concrete example of God’s love.  Most 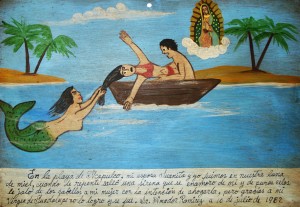 Over time new retablos replaced older ones and priests had to remove some.  Often the removed retablos can be found in stores across town of varying quality and costs.

Today in SMA retablos are still painted and placed in the church in Valle de Maiz, historically an indigenous neighborhood.  The saints and Virgins providing the miracles haven’t changed but the nature of the miracles have.  They now include immigration issues, internet bulling, prison time and traffic accidents.

Also the artistic representation has changed.  You can frequently find retablos done in fabric outside the Organic Market.  Often the retablos are then sewn together to form bedspreads.  Who wouldn’t want to sleep under the warmth of multiple miracles? 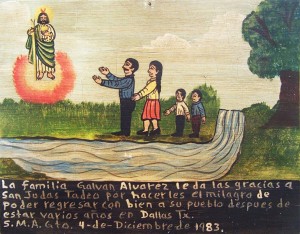 In spiritual terms, these paintings provide a way of expressing devotion to a favored icon.  In cultural terms, they represent one of the few means by which anyone can give public expression to their anxieties, fears, and sufferings that have been relieved.

Both Diego Rivera and Frieda Kahlo collected retablos from which they drew inspiration for their own art and faith. Perhaps you can too.