Saint Dominic was a Spanish priest in the late twelfth century and founder of the Dominican Order of teachers.

The spread of the rosary is attributed to the preaching of St. Dominic.   The rosary has for centuries been at the heart of the Dominican Order.  Dominicans have been instrumental in spreading the rosary and emphasizing the Catholic belief in the power of the rosary.  To wear a rosary around the neck is very common in San Miguel de Allende.  Following death, friends and family unite to say the rosary for nine days. 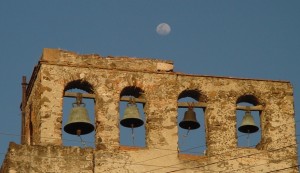 In San Miguel the church in honor of St. Dominic is Santo Domingo on the Real de Querétaro where it intersects with Correo.  Behind the church is a school taught by Dominican nuns.

Dominican nuns lived next door in their convent.  However, during the upheavals in Mexico’s Catholic Church, the order’s nuns fled except for the Mother Superior who disguised herself as a cleaning woman and witnessed her convent being used for less noble purposes.  Eventually, the convent went back to the nuns and they continue to this day teaching San Miguel’s youth.

The street, Zacateros, was originally named for Saint Dominic while the neighborhood surrounding the church is still known as Santo Domingo.