A frequently reproduced painting seen in churches throughout town features Mary and St. Ignacio Loyola, alongside St. Michael, deciding who to yank out of Hell and thrust into Heaven.  I was rather surprised to recently learn the original was painted by 1700’s Oaxaca artist, Miguel Caberra.  Miguel is best remembered for his leading work in the obscure, but widely collected

today, field of Caste Paintings.  Caste Paintings depicted in detail the various racial combinations formed by interracial marriages and the resulting children in the Colonial times.  Basically the lighter skin tone a person had, the higher in status they could claim; conversely, darker features meant less opportunity.

Miguel’s painting in the Parrochia, Third Order and other churches is a more religious theme called The Virgin of the Lost Souls of Purgatory.  Here Mary decides who among the flames gets to leave.  Folks in the flames are nude except for some with headgear that indicate their status as kings, queens or bishops in a fiery game of chess. 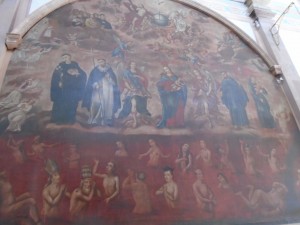 It was common for indigenous artists, when depicting Hell, to include clergy as a subtle poke at the Spanish and reminder that not all clergy, or royalty, are good.

Erroneously I had assumed Purgatory had been eliminated along with Limbo decades ago, but not so.  Also, where I learned in school Purgatory was roughly the equivalent of an after-life detention where you waited for an endless summer vacation in heaven to begin, Mexicans viewed Purgatory as an extension of Hell.  Not only that, but we all go through Purgatory to cleanse our souls to become more pure and child-alike and allow an entrance to Heaven assuming there aren’t enough prayers being said on Earth to lift our soul.  Hence the endless badgering by my mother for we kids to offer up prayers for the “Poor souls in Purgatory.”

Even Jesus goes to Purgatory for the 3 days between dying on the cross and Easter Sunday.  That was news to me!  Like being crucified wasn’t  icky enough.  Plus, let’s face facts, if the Son of God needed 3 days in Purgatory before getting released, imagine how much time you and I may require!

Plus, I know me.  I’ll likely have pangs of envy (a deadly sin) that I don’t have a sporty sombrero to wear while hopping about flames which will serve only to increase my time needed in perpetual detention.