St. Joe, The Power of Napping

Once having used staple saint names Michael, Mary, Margaret, Marie, Patrick and most of the apostles on my siblings, my parents’ middle aged surprise (me!) got named for the most powerful saint, Joseph.

To the more text bound countries north of here, St. Joseph is little mentioned in bible and with scant personal details.  For the faithful in San Miguel this simply provides an opportunity to personify Joseph making him more relatable than simply the lad without sheep or frankincense in a nativity set.

Technically speaking, Joseph is the most powerful saint.  Other saints worshipped Jesus, or were his pals.  Joseph was his adoptive father.  Until recently all baby boys in SMA had the name Jose, Pepe for short, an abbreviation for adopted father. 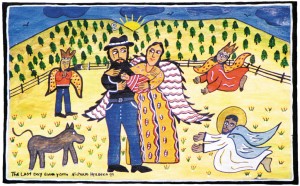 During Colonial times nearly every popular profession in SMA (carpenter, candles, masonry, etc.) had St. Joseph as their patron.  As such his feast day was a huge celebration.  Well dressed indigenous women from neighboring villages would pluck the St. Joseph from their local church’s nativity set to place him on a float and carry him into town to the hacienda located on calle Presa between La Luz and the neighborhood, Obraje.

Here was a chapel in his honor with an outstanding wood likeness.  For days there were celebrations including storytelling, dancing and the then popular sport of burying live chickens up to their necks for horse riding cowboys to pluck up from the earth.

During the wars of the 1920’s, the hacienda was raided and the wooden St. Joseph statue burned.  After that celebrations became calmer and rallied around the chapel to St. Joseph up in the Balcones that continue to this day with music and marathons.

Saint Joseph is also widely invoked as the patron of a peaceful death for saving Baby Jesus from being murdered by King Herod and for Joseph’s unusual perspective on death.  Legend holds Joseph was taken into heaven mid July when Jesus was 17 years old.  Whereas others leave Earth with the expectation of seeing Mary and Jesus in heaven, Joseph had to leave Mary and Jesus behind on Earth.

When Joseph is mentioned in the bible it is normally for his protective savvy with Mary and Jesus.  These actions came to Joseph through his dreams. 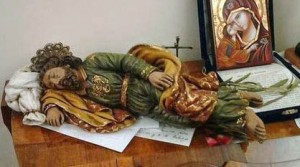 So while gringos may bury a statue of St. Joseph upside down to aid in the sale of their homes (he is also the patron of real estate agents), here the faithful take a different approach.  Like the Pope in Rome also does, one places a sleeping St. Joseph statue on your desk below which you write out your troubles for Joseph to solve while slumbering.  The logic being if he could solve life-threatening problems for Mary and Jesus, imagine what solutions he can siesta through for you!