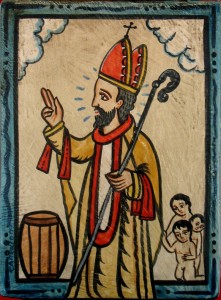 On a recent tour a resident, upon being shown the image of St. Nicholas with frolicking boys behind him in the Temple of Good Health, made an off-color comment about a Bishop with nude young men.  On one hand, I was surprised I hadn’t made that connection instead assuming the lads were present in St. Nicholas’ role as patron of children’s health.  On the other hand, it did make me ponder why were there only boys, and just where were their clothes?

St. Nicholas was a third century Turkish Bishop.  Tradition states that there was an evil butcher that kidnapped three small boys, chopped them up with an axe and pickled them in a barrel.  Their remains were then to made into meat pies and sold much like Sweeny Todd attempted centuries later in London.

St. Nicholas became aware of the horror, rushed to the barrel and was able to raise back to life and wholeness the young boys.  To make the spiritual point, the painting’s barrel doubles as a baptismal font, symbolizing death and rebirth through prayer.

San Nicolas is popular in Mexico with nearly 200 cities bearing his name, including a village just south of Celeya.   I recently came across a 1904 retablo where a Mrs. Tiomitzi thanks the saint for healing her son’s leg after a basket full of tortillas fell on him.  Near it was 1940 retablo by Casimiro Martinez Ortega who, not having sold one of his toys all year, sold all of his toys on the eve of Three Kings Day thanks to Saint Nicholas.

To most Northerners Saint Nicholas is remembered as the inspiration of Santa Claus, translated from the Dutch word Sinterklaas.  It is from Saint Nicholas holiday traditions like stockings, candy canes, gift giving in secret during the night and seasonal concern for the needy originated.  Godiva chocolates produces a large, solid chocolate of St. Nicholas with, at his feet, three boys and a barrel.

As a teen, I played Santa Claus for various children’s events though given my youth and Catrina-like frame I am surprised I even fooled toddlers.

Every Monday evening at 5 you can join the rosary and procession for St. Nicholas (in his signature red) around the Temple of Good Health.  Faithful give thanks for his continued intercessions in the well being of their children.

And what became of the evil butcher?  He is condemned to follow St Nicolas in shame and remain a despised character for all eternity.  While St. Nicholas gives away toys, the butcher dressed in brown follows alongside as a holiday Bogeyman in northern Europe.  Here in SMA, the butcher is largely forgotten, replaced with the memory of St. Nicholas’ aid to children and the ever encroaching image of an American Santa Claus.