The Chinese place in town my kids were partial to on the corner of Mesones and Reloj, up from the library, had closed but recently re-opened by the corner of La Luz and Presa.  In the interim, the wife had her third child and here you don’t have to name the baby for several weeks after leaving the hospital.

So while holding the nameless creature and enjoying a good (Winnie the) Pooh-Pooh Platter I tried to talk her mother into the name Tallulah Maria de la Luz.  My thinking, I explained, was that her amigas would call her by her obvious nickname, Talu Malu. 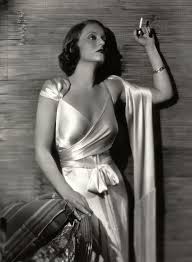 I told Mom Tallulah is indigenous for waterfall though to me, Tallulah is better known as the 1930’s movie star whose wisecracks, labeled with irreligious wit and delivered in her famous husky drawl, blew her reputation out of all proportion.

Maria de la Luz is for the popular image of the Virgin of the Light that appears throughout town with a colonia behind the mall named for her.  This Virgin began as a painting in 1722 Sicily.  The painting depicts the Virgin on her left in very typical form at that time as Queen of the Heavens holding baby Jesus who is tossing out hearts on fire to represent his eternal love.

The Virgin’s right hand side is where she breaks the mold.  Normally Mary is depicted as contemplative, maternal or even sad.  Here she is powerfully assertive and my personal favorite image of Mary for she is holding a man avoiding his falling into the jaws of Leviathan (an evil sea monster from the Old Testament who swallows men’s souls into the Sea of Chaos). 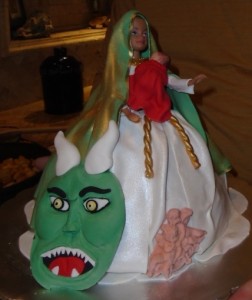 Ten years after being painted the painting was smuggled to Leon by Jesuit priests that th
en built the Basilica to the Lady of Light spreading veneration of this image to the Americas.

However, the then Pope wasn’t partial to an image of Mary featuring a pagan sea monster so the Leviathan’s image was censored since 1760 by the Church and replaced by the flames of hell, or dark clouds that symbolize Purgatory.  Variations of the image featuring a sea monster, darkness or hell are seen in nearly every church in SMA.  The Parroquia itself features multiple versions including a mural of the creation of the original painting.

Of course, her feast day is widely celebrated with dancing, boxing, mechanical rides, Barbie doll cakes in her image and much else by her namesake church in town.

As for little Talu Malu’s Mom, she found the possible name humorous, but she’s pretty set on Joyce Melanie which, here. Is an equally unusual name as Tallulah (not Malu though, that’s fairly common).  But perhaps with Talu Malu I found my next dog’s name!