Tamales vary region to region but they always taste delicious.  Frankly I prefer take out so I can take them home and slather them with butter and cheese in an attempt to turn them into Low Country style grits with marginal success. Regardless of how you enjoy tamales, are you aware of their twisted history in the culture of SMA?

Tamales started out as standard food fare at indigenous religious festivals because tamales represented corn, the beginning of life.  Well, actually the indigenous believed the gods made early man first from mud but these guys didn’t grasp the notion of honoring the gods so they got washed away with the rains.  Next came man made from wood, but these too did not appease the 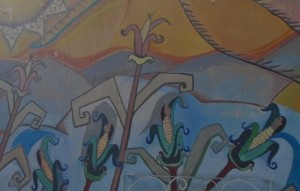 deities so lightning struck and burnt them.  But the third time is the charm and men made from corn could sing, dance and pray to the gods so they were keepers!

When the Spanish arrived they placed their hands squarely on the indigenous’ shoulders, looking them straight in the eyes (which they despised, as it is disrespectful) and clearly stated “You are confused.”  Continuing with “Tamales are not representative of the beginning of life rather they represent Baby Jesus and you must keep the baby wrapped in leaf blankets to keep him warm.”

You see, the indigenous went to war to gather prisoners of war to have human sacrifices to their gods.  This new god offers his body and blood as an act of love and nourishment.

So in today’s SMA any faith-based event, and, really, every festival is except for modern commercial affairs like the film or hummingbird festivals, tamales are served as reminders of Baby Jesus’ love.

It is also why if you watch the sit-com, Cristela, about a Mexican- American family in Dallas the Christmas shows always focus on the characters making early Christmas morning tamales in a last minute “Baby shower for Mary.”