The Street of Lost Souls

During the Inquisition public executions were routinely held in the Plaza Civica, then called Plaza de Soledad in honor of Mary the Saturday before Easter when Jesus has died the day before (Good Friday) and won’t be back until Easter Sunday.  The signs in town leading to Plaza Civica still use the pre-Independence name of Plaza de Soledad which can be endlessly confusing to the visitor looking for Plaza Civica. 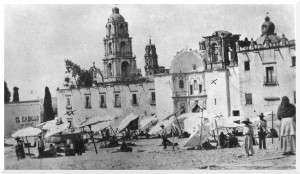 Following an execution, done in public for all to see, the bodies were then buried in Plaza Civica.  In case you had any doubts the Inquisition was not the best time to be a woman, a wealthy Spanish man could simply accuse his spouse of infidelity and she joined in the long line of executions.

Hangings or burnings, living or dead, the executions continued.  For example, you have an aunt that was accused of stealing, but she had died prior to the accusation.  In which case, her body would be exhumed, and her remains burned in front of all of her extended family.  Behind the family, spectators would dress in their finest to witness the family’s shame.  For the following generations your family would no longer go by the last name of Toone, Smith or Del Rio and instead simply be known by the last name, Robber.

The street alongside Plaza Civica is named Animas.  When I first arrived not speaking a word of Spanish, I assumed Animas was Spanish for Animals since the street led to the market and many butcher shops.  Actually Animas means Lost Souls named for the many ghosts that were seen wandering following their executions and confused as to where they were or where to go next.