Weekly I teach about an hour south of town in Escobedo.  The only thing more than dancing my students enjoy is having a party with dancing!  Frequently these fetes are hosted in the fields surrounding town where several students farm.  Along with the comida and camaraderie I enjoy see the blooming fields of flowers that will soon be on display in the markets here in town.  Plus I get gifts! 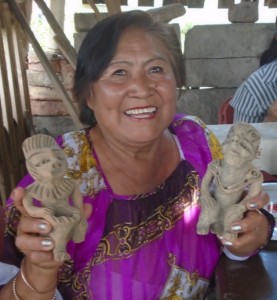 Knowing my interest with indigenous culture, whenever a grave offering (normally a 5 inch man) is unearthed from long-ago Chichimecas my students set them aside as gifts for me.

Chichimeca is actually a broad term for many nomadic tribes that were here when the Spanish arrived.  Chichimeca literally means dog collar and was a derisive term for tribes living outside settled agricultural areas that fiercely resisted both foreign intrusion and clothing.  Even today, the word Chichimeca is associated with terms like savage, primitive and uneducated.

As the Spanish noted upon their arrival, the indigenous were rather turtle legged as was their art done to look like themselves.  The long legs of today’s telenova stars are the obviously results of generations of mixed race marriages. 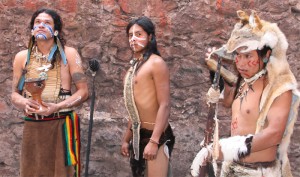 Also shown in the figures are different concepts of facial beauty.  Instead of a Cindy Crawford birthmark, extended earlobes, protruding lips or upturned noses (from stuffing beans up in there) were the then signs of sex appeal.

Each figurine is adorned with detailed jewelry.  Jewelry, like a love of sports and worshipping a higher deity, are parts of pre-historic life that still hold true.  On their heads are elaborately detailed chapeaus often in animal motifs like an eagle in flight.

Suffice to say the initial image of many indigenous left the Spanish wondering if they were closer related to animals rather than themselves. 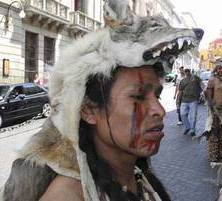 I figure at the rate I’m going I’ll soon have a terra cotta army of figurines worthy of a Chinese emperor’s tomb.  Speaking of tomb, my last name is Toone (think singer, Debby Boone, with a T), though I do find it humorous to be quoted in the press as “Tomb says….”

And Tomb says if I get buried in SMA I’d like to be buried with my rosary and some Chichimeca grave offerings.  This way, in the distant future, my Irish bones can be found in SMA holding a metal rosary with the relic of a first century Roman saint and my little Pre-Hispanic clay pals.  That combination is bound to flummox any future archaeologist and provide me some postmortem chuckles!