As a child, my sisters had the 1960’s required Barbie dolls to dress and undress repeatedly in the clothes my Grandmother made for them.  The only other time I saw Barbie was when my mother made doll cakes.  For those not in know, doll cakes are when from the waist up you see Barbie and her billowing Tara-esque skirt is a cake baked in a bowl and placed upside down to be the lower half of Barbie.

My mother made Barbie cakes for girls receiving their First Communion.  Each cake was intricately decorated in white to represent a Bride of Christ, which is a nun upon making her final vows.

When my daughter arrived she had little interest in Barbies, and I had even less interest in cake decorating.  So in my desire to provide her doll cake memories I changed the custom, a tad, and made Halloween witch Barbie cakes.  Now Barbie could be ugly, brown (read chocolate) and less difficult to decorate.

I kind of forgot about doll cakes until years later I arrived in SMA and wanted to have a cake to celebrate my female students’ birth and saint days.  That was when I rediscovered the power of Barbie.  Not as a bride, or witch, but as a Virgin. 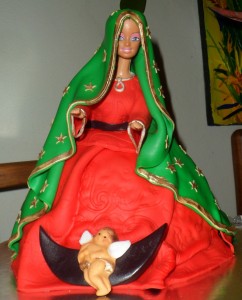 Having countless Lupitas in my classes I discovered three important places.  One being a tienda (store) that I could get 20 peso used Barbies with tangled locks of hair.  Another tienda was a bakery that if I drew out what I wanted, baked and decorated the cake accordingly.  The third place is a barber shop that could cut Barbie’s hair into the proper coif.  Suddenly The Virgin Barbie of Guadalupe cakes were born.

These were followed by Maria de Luz cakes for students named Malu and featured the Virgin’s ever present sea monster.  Come Posada season angel cakes whose skirts portray the Christmas story in felt-like geometric simplicity are all the rage.

My only faux paus came on Mary’s birthday where I ordered cupcakes to feature Baby Mary.  I had only a few minutes between carrying the statue in Mary’s procession and picking up the cupcakes during the mass.  As everyone knows, a time-sensitive plan in Mexico is never a good one. 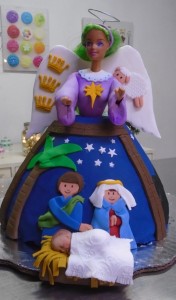 Arriving breathless at the bakery I received cupcakes with the yellow creatures from the Despicable Me movies.  “Why”, I thought, “are my Maria Ninas (baby Marys) minions?”  The obvious answer was my accent made “Maria Ninas” sound strikingly like “Minions”.

Luckily the bakers were both humorous and quick thinking as I soon had babies on my cupcakes.  Again, I was reminded of the power of a Virgin Barbie to make the ladies laugh!