Where in the World is the Infant of Prague?

When I was a child an ancient statue of the Infant of Prague sat upon my parents’ upright piano I spent many years practicing on.  The only time I saw the statue move was during our Hershey, PA church’s annual summer parish picnic.  My Irish mother moved him towards facing the wall to insure there would be no rain.

Until I started living in central Mexico I never saw the Infant of Prague again and much like the piano, I didn’t really miss him.  Suddenly, he was everywhere including most every church in San Miguel de Allende.

The Infant of Prague is a wooden 16th-century  statue of child Jesus holding a globe. Legends claim that the statue once belonged to Saint Teresa of Avila.

St. Teresa gave the statue, originally from Prague, as a wedding gift to a Spanish noblewoman.  This woman then gave it to her daughter at her wedding.  The daughter then gave the statue to St. Teresa’s Carmelite order of nuns upon her death.

The devotion to the child Jesus was especially popular in 16th century Spain, and the Spanish explorers brought the devotion to the New World, and thus in most churches in SMA and across Mexico you will find a little ‘Infant of Prague’.

This devotion reminds us that ‘unless we become like a little child we cannot enter the kingdom of heaven.’  The statue’s raised two fingers are a blessing gesture symbolizing the two natures (man/deity) of Jesus and the three folded fingers represent the Holy Trinity.

In Ireland, devotion to the Infant of Prague and belief in its power to influence the weather is still strong with brides facing him to the wall to insure a rain-free wedding.  In both Ireland and SMA, a wedding gift of a statue of the Infant of Prague is particularly auspicious. 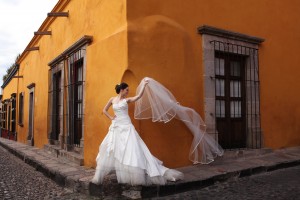 Oddly I then had another woman on a tour that told me the original Infant of Prague statue was placed in a church in Missouri to escape WW2.  From what I read it stayed put in Prague so either that little guy has a well stamped passport or he never actually left Europe and this gal had her legged pulled in the Show Me State.

For me, my Infant of Prague has moved from County Roscommon Ireland to my parents’ Chocolatetown, USA piano to my Mexican kitchen and his little satin outfit is worse for the wear and years.  Perhaps it is time to take him to Las Monjas church where the cloistered nuns, in addition to making cookies, find work making the clothes for church statues through out town.