When I was a junior at Bishop McDevitt High School (go Crusaders!) we all took a test that would tell us what future professions we were most adept for.  “Wow, how cool is that?” I thought, considering it the Magic 8 Ball of my future until I got the test results.  My most fitting future career was a journalist (Ugh, I wanted to live a fascinating life, not record someone else’s!)  Then came photographer (Please, even in the Dark Ages of the 80’s photographers didn’t make real money.)  In third was hairdresser (What?  I didn’t much care about my own, even then, graying hair, much less anyone else’s!)

On some level I must have known my career path was not going be a straight and narrow one. 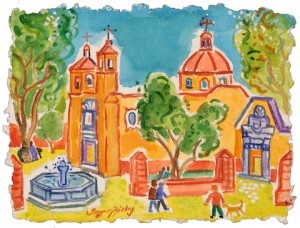 One of the saints special to SMA also had a career path that was, well, a path less chosen.  Saint John of God started his profession as a paid gun serving in any war, on any side, that paid him (This when he was simply known as John, before the Saint and “of God” parts got added on to his name.)

At the age of 42 he had a nervous breakdown and recovered to become a priest that started his own order dedicated to taking care of physically and mentally ill.  Around the world today there are St. John of God hospitals and his order provides the Pope’s personal physician care. 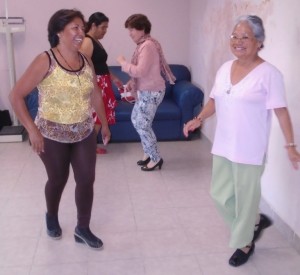 In San Miguel much relates to St. John of God.  There is, of course, the San Juan de Dios church and our largest food market that is named for him, located across the street from his church.  Behind the church is the John of God cemetery for what were once the wealthy local Spanish.  Next to that was the John of God Hospital for the indigenous that now serves as a grade school.  Next to that was the St. John of God indigenous cemetery that today is DIF.  DIF is a government agency providing social services including healthcare, food and my cumbia class to the residents of an age.

Following a career in the foreign service, creating a company, being a single parent and authoring two books on Southern folklore I now do something I never saw coming, giving tours and workshops on SMA’s culture of faith.  That’s what is so cool about finding yourself in SMA today.  It doesn’t much matter what came before in your woods, because now you can choose, or forge, a path in your woods of life that is as limitless as St. John of God’s was.