My family (grandfather, parents and siblings) have long worked for the railroads.  They were conductors, brakemen, office workers and ticket sellers.  My childhood affiliation with trains was limited to an extensive HO scale train and village featuring mountains, running waterfalls and seasonal snow (read baby powder) that occupied the better part of my parent’s basement.  That was until I started volunteer teaching dance in Empalme Escobedo. 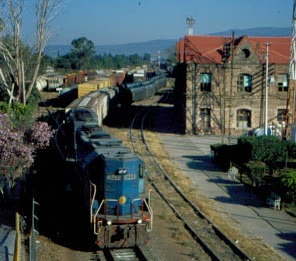 Empalme Escobedo (Esdobedo for short) is a town named for a General and the ability to switch and re-connect railroad cars which occurs endlessly.  The non-stop movement of 1950’s era trains occur directly in the town’s jardin and frequently brings traffic (far more bikes than cars) to indefinite standstills.

Located between Comonfort and Celeya, Escobedo is not a must see tourist destination.  Lacking hotels, restaurants or local handicrafts, the economy of Escobedo begins, and ends, with the ever-moving trains. 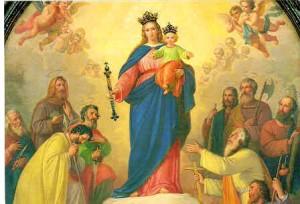 However, Escobedo’s cultural claim to glory is Mary Help of Christians (Virgen de Auxiliadora).  Her name is Help, because she helps Christ regarding humanity and in this city, during times of past plagues.

Originally the image was featured in a painting by Italian master Thomas Lorenzone in which the Virgin appears with Jesus, the Apostles, other saints and angels personifying a concept of Mary popular since the 4th century particularly in Greece, Turkey and Egypt.

icated to this image is like much else in this 200 plus year old town, on the outside dirty with train soot but once inside, magnificent.  The architecture is the clean Federal style found with national monuments in Washington, DC yet featuring Tiffany –style windows and folk art statues, the church is a calming array of many styles.

On her May 24th feast day the town comes to life closing off centro with food, games and fun as the statue of Mary proceeds around town.  Rock 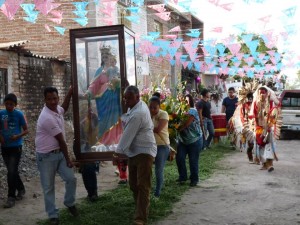 concerts play in the evening while my students perform to danzon, cumbia and other Latin rhythms.   It’s well worth the hour long foray into the hinterlands to visit, between Comonfort’s gardens supplies and Celeya’s box stores!

For the record, if you are blocked by the trains that bisect the middle of town simply park and use the pedestrian bridge to access the other side and consider that Mary’s help!  Choo – choo!