In my recent witches of SMA research two gal pals and I came upon an Aztec witch doctor who uses the Aztec calendar to learn what your date of birth tells about you.  He’s easy to find as he sets up shop right outside the entrance of Starbucks.

I was a little worried as we waited in line as the lad before me got the signs of heavy rain and earthquakes.  I don’t need that explained to know those can’t be good birth signs!  Both represented a series of constant and sudden changes in life which is why his marriage wasn’t working.  The lad nodded in agreement.

Luckily my savage Aztec sign is a cuddly dog carrying a knife.  The dog means I’m loyal and a good teacher leading folks down the paths they need to travel.  The knife implies being driven with a certain affinity for rocks.  I do know fine jewelry and being a good, if furry, leader is certainly a summation of my life I can live with with pride.

Unlike my one poor pal who ended up being a serpent!  At first I mentally placed her next to earthquake boy until the witch explained how the snake was only considered evil with the garden of Eden when the Spanish arrived.  To the indigenous a snake is a high up deity representing intelligence and a drive to succeed in negations.    My pal is wicked smart but has no interest in business or wealth so the good doctor was half right.

Still, I’d rather be an adorable puppy.  No one wants to rub a snake’s chest in an effort to excite him! 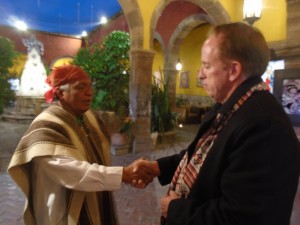 After our calendar readings we each receive stones with a leather locket to place them in. The pebbles represent things like money, health and such.  One gal receives her pebbles for wealth and health then a surprisingly large oblong red pebble representing sex.   Speaking quietly, and in English, I state the obvious when we all stared at this large red rock in her palm “See, if you’ve a large one red one in your hand all the others are soon forgotten.”

Our resident witch laughingly got the implication immediately and made me realize he knows English quite well to understand a bit of blue humor!

He also picked up on the cancer of the other healthy looking pal.  In all fairness, his spirit and calendar guides were often “dead” on.

The indigenous in and around SMA placed great emphasis on when one is born and if you believe there are no coincidences in life, there is a certain logic to that assumption.  However, are you really going to pay that much attention to a knife wielding dog?