I made a mistake once.  Well, I’ve made many, but this particular one only once.  I publicly confused Salma Hayak with Penelope Cruz thinking, like the Gabors of my youth, both were attractive middle aged foreign actresses with thick accidents.

Not to those in SMA!  Salma is Mexican, and portrayed Frieda in a

film.  Penelope, well, isn’t and didn’t.  As for those Gabors, they had looser identity issues.  So much so than when a 1970’s Hollywood telephone line repair man high up on a pole hollered down hello to a nude Zsa Zsa swimming in her private pool she stopped mid-stroke to yell back “No, dah-link, it’s me, Eva!”

The same problem faces the Judes, not those of Beatles fame.  Jesus had two apostles named Jude.  One, Judas Iscariot, is the lad that turned him in for 30 pieces of silver.  You’ll see him in SMA during Holy Week often hanging from a tree in puppet form with a bag on money beside him to remind us of his suicidal fate.  Then his piñata image is blown to pieces on Easter morning.

The other Jude was Judas Thaddeus.  Like John the Baptist, Judas Thaddeus was Jesus’ cousin (nepotism is nothing new).  It is this Jude that is SMA’s most popular saint and the one that appears on jewelry, tattoos and walls in SMA in addition to having the most offerings and candles in every church in town.

The legend to St. Jude (Judas Iscariot, for obvious reasons, is not a saint) is that following Jesus’ death he traveled to what is today’s Turkey to visit the ill emperor.  Once there he placed a dinner plate sized medallion with Jesus face on the king and cured him.  This helped convert the area to the new religion and earned St. Jude the patronage of lost causes. 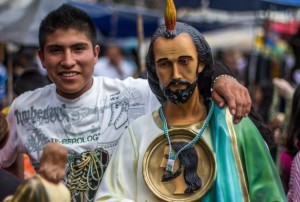 Since there are more lost causes in life than anything else in life, he is the ‘go to’ saint.  So much so he’s part of daily conversation.  For instance, let’s say you go to Immigration on Thursday and are told you need to have a form in by Friday.  This form comes only from Salma Hayak and she’ll be back in the office Monday.  If you start to argue this is a classic Catch-22 scenario you’ll be stopped mid-sentence and reminded “This is a conversation you need to have with St. Jude.”  It is said without rancor or sarcasm, because it just is and you should have known that.

St. Jude is always pictured in his signature yellow and green holding the dinner-plate sized image of Jesus’ head and the flame of the Holy Spirit on his head.  His special day in the 28th of each month. 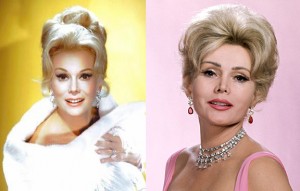 In SMA St. Jude is held in high regard and general fondness.  Much like Eva Gabor is for her television work on Green Acres, regardless of what her quicker thinking and wittier film star sister Zsa Zsa said.