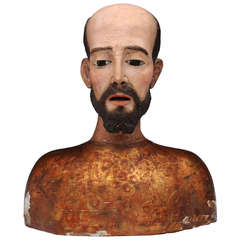 Ignatius of Loyola was a Spanish knight from a noble family who following injury in battle during the early 1500s had visions of Mary, becoming a hermit and priest who founded the Jesuits.

Jesuits had a profound impact on San Miguel de Allende, and around the world, forming numerous Jesuit schools.  The first clergy in San Miguel were Jesuits.  In addition, the nearby Sanctuary of Jesús de Nazareno de Atotonilco is a Jesuit sanctuary inspired by the doctrine of Saint Ignacio de Loyola. 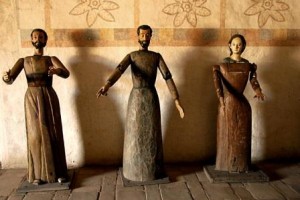 For their advanced and liberal teachings, combined with converting their missionary stations into lucrative commercial centers (like the silver mines in nearby Pozos) the Jesuits were expelled from Mexico in the 18th century.  The departure of the Jesuits was a huge determent to the conversion of the natives and their education in science, geography, history and the arts.

Saint Ignatius of Loyola is the patron saint of soldiers and Jesuits and frequently featured in statues around San Miguel.  His feast day is more heavily honored in the hills of Cerro de los Picachos, outside of Guanajuato.  Processions to the caves begin the night before with candles and flashlights.  Celebrations include fireworks, dancing and exploring the caves where Jesuits hid during their departure from Mexico.

St. Ignatius is also known for his series of spiritual exercises where you place yourself within the bible story being read.  For example, you become a shepherd at Jesus’ birth, or standing among the crowd at his crucifixion.  Be careful, however, as Ignatius’ style of prayer frequently leads to unforeseen assessments about your relationship with God.